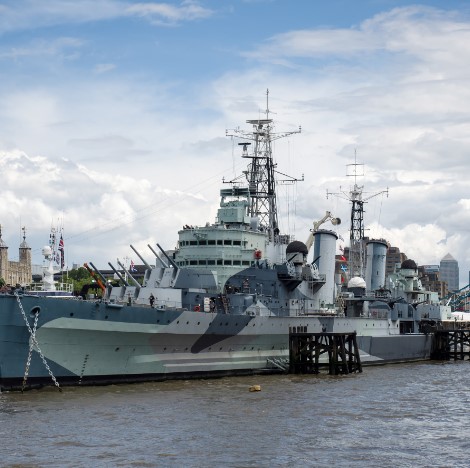 HMS Belfast is a warship anchored in the River Thames between London Bridge and Tower Bridge. She was a landmark of Britain's naval heritage and has been proudly displayed in London since 1971.

This imposing warship was built at the Harland and Wolf shipyard in Belfast and was launched on St Patrick's Day 1638. It was not until 1639 that the ship entered the service of the British Royal Navy.

Her beginnings were somewhat chequered, as shortly after entering service a magnetic mine laid by a German submarine caused her serious damage which took almost three years to repair. After this incident she served with great efficiency during the Second World War, participated in the Normandy Landings and took part in the Korean War in the early 1950s.

After the Korean War its role was limited to humanitarian relief work until 1963; two years later it was decommissioned. In 1971 the ship was opened to the public as a tourist attraction and in 1978 it became an important part of the Imperial War Museum.

Today HMS Belfast is part of the Imperial War Museum in London. The ship's deck is accessible via a walkway that connects it to the pedestrian walkway on the south bank of the Thames. War history buffs will have the opportunity to learn about the daily life of the sailors on the battleship, the different parts of the ship and the combat system of this legendary warship in three large sections. Here are the three sections of the museum:

Life on board the ship: this section focuses on the life of the sailors and the different departments of the ship. It recreates and represents with mannequins the different daily aspects of the crew and also simulates quite realistically the facilities such as the galleys, the infirmary, the chapel, the cabins and the decks.

The inner workings: This section shows the technical aspects of the ship, such as the mechanical, electronic and communication elements. The tour includes a visit to the engine and boiler room, the communications centre and the command centre.

Another section of the museum is the Action Centre, which takes us on a tour of the upper deck and the armament and protection system and the fire-fighting system.