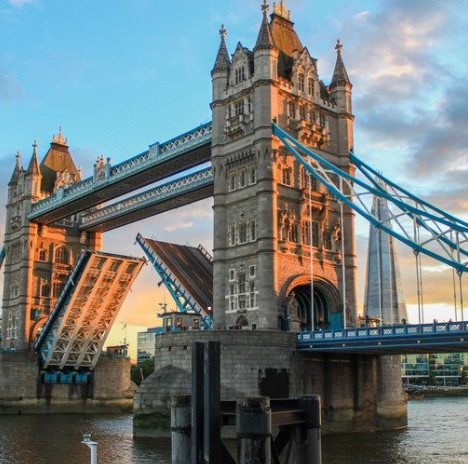 Tower Bridge is one of London's most treasured landmarks and the subject of many of London's postcard images. The bridge is world famous for its beautiful Victorian Gothic style and its ability to soar, facilitating the passage of large vessels on the Thames.

The great expansion of London and its rapid growth made it necessary to build a bridge to relieve congestion in the east of the city, as most of the existing bridges were to the west.

It took eight years to discuss its location and choose the winner of the design competition, in which more than 50 proposals were considered.

Finally, after the design by city architect Horace Jones was chosen, work began in 1884. After 10 years of work, the bridge was completed in 1894.

The bridge is 265 metres long, with two 65-metre-high towers and a distance of 61 metres between them. Each of the two lifting platforms is 30 metres long and can be raised 83 degrees to facilitate river traffic.

The two towers of the Tower Bridge have several rooms that can be rented for business meetings or celebrations of any kind.