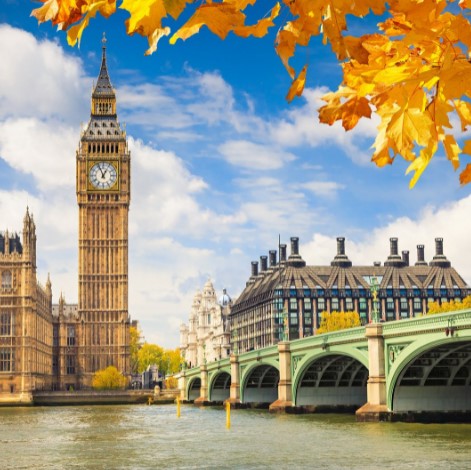 Big Ben is the most representative tower of the City of London and is home to one of the largest mechanical clocks in the world. Big Ben is the name by which the tower is known worldwide, but officially this name is due to the main bell, which weighs about 13.8 tons (the first one weighed 16 tons but it broke and was replaced).

The construction of Big Ben began in 1843, after the Great Fire of London on 16 October 1834, which seriously affected the Palace of Westminster. Charles Barry was in charge of the reconstruction project, which added the tower to the palace and designed it in a Victorian Gothic style.

The monument is 96.3 metres high and sits on a 225 square metre base. Each clock face of Big Ben is 7.5 metres long and the hands are of great length; the hour hand is 2.7 metres long while the minute hand is 4.3 metres long. The watch's numerals are no slouch at 50 centimetres high.

The clock is known for its reliability, as it has rarely stopped working. Even after the bombing of London during the Second World War, the clock has not altered its punctual reputation one iota.