Districts of London. Information about London. 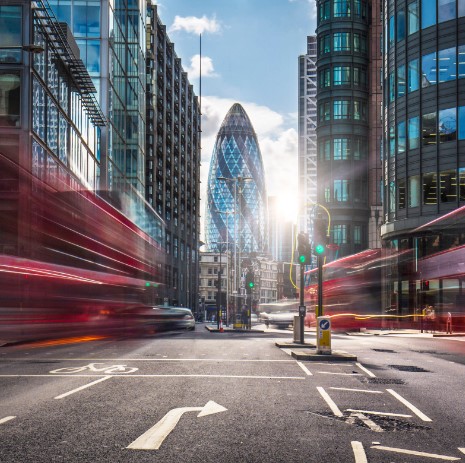 London has 33 boroughs, which are further divided into interesting neighbourhoods and avenues, most of them in central London. Discover the best of them.

The City is the largest financial district in the UK and one of the most important in the world. Although it only has a population of around 7,000 inhabitants, on weekdays it is home to more than 300,000 people.

In this area you can't miss St. Paul's Cathedral, Tower Bridge and the Tower of London or the modern City Hall building.

This area is bounded by Piccadilly Circus, Hyde Park, Oxford Street and Regent Street. It is a rather posh area full of luxury hotels and flats, swanky shops, Georgian-style houses, offices and embassies. It is frequented by London's wealthiest population.

These are London's most touristy areas and are steeped in history. Since the time of Edward the Confessor, Westminster has been the seat of British government. Dominated by Parliament and Westminster Abbey, the area stretches along the River Thames to the east of St. James's Park. At the northern end is the famous Trafalgar Square, one of the city's most important attractions and home to the majestic National Gallery.

Whitehall is the main street linking Trafalgar Square to Parliament Square. It is home to Downing Street, the residence of the Prime Minister of Great Britain.

Covent Garden and The Strand

Covent Garden is one of London's most popular areas, boasting an impressive shopping area that delights London shoppers and tourists alike. Enjoy a rich array of restaurants, pubs and outdoor cafes, as well as some of London's most fashionable shops. Street performers and street markets are another of its most striking attractions along with Covent Garden Square.

The Strans forms the southern border of Covent Garden. It is lined with theatres, shops, 5-star hotels, restaurants and pubs.

Soho is London's most multi-racial neighbourhood and home to the city's most vibrant nightlife. Its streets are lined with restaurants, trendy bars, luxury boutiques and sex shops. These shops are even more prevalent on Old Compton Street, the city's main thoroughfare. The area is also home to London's popular Chinatown.

Although not officially a borough, it comprises an area stretching along the south bank of the Thames around Waterloo Station. Once an area of factories and warehouses, it was transformed into a space for the promotion of the arts with the construction of the South Bank. It was also the site of the beautiful County Hall which now houses businesses, the London Aquarium, the Dali Universe gallery and the Namco Station playground. Right next to it stands the great London Eye Ferris wheel.

Saint James's begins at Piccadilly Circus and extends southwest towards Pall Mall. This district is home to Queen Elizabeth II's famous residence, Buckingham Palace. It has numerous gentlemen's clubs where you can play poker, drink spirits and smoke.

Bloomsbury is one of London's most cultural areas, home to the British Museum and London University.