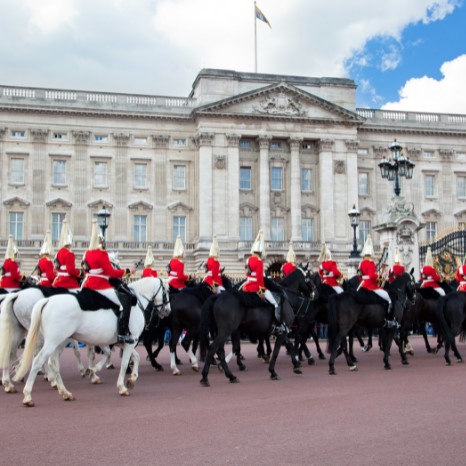 Buckingham Palace has been the official residence of the English Royal Family since 1837, when Queen Victoria took up residence here three weeks after her coronation. It is currently home to Queen Elizabeth II.

The original building was built in 1705 as a country house by John Sheffield, the Duke of Buckingham. In 1761 King George III bought the house for his wife and renovated it. In 1826 King George IV decided to convert the house into a Royal Palace but he and his successor died before the building was completed. Queen Victoria finally moved into the palace and it has been the official residence of the English monarchy ever since.

The palace was extended in 1850 with the addition of the east wing, where most of the palace's rooms and a large ballroom 40 metres long were added. The main façade facing St. James's Park dates from 1913.

Queen Elizabeth II and Philip Mountbatten (Duke of Edinburgh) occupy part of the palace, although the rest is used for official events and as residences for some officials. The palace has 600 rooms, a throne room, a ballroom, a picture gallery, a swimming pool and a large garden.

The use of space is approximately as follows: 52 rooms for the Royal Family and guests, 188 rooms for service personnel, 78 bathrooms and 92 offices.

Some of these rooms can be visited during the months of August and September when the Royal Family is not at the palace. The tour includes a total of 19 rooms such as the Throne Room, the Queen's Gallery and the Ballroom, where lavish state banquets are held. The tour also includes a walk through the palace garden.

Changing of the Guard