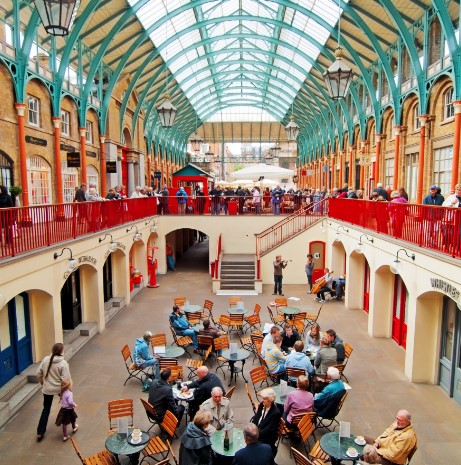 Covent Garden is one of the most touristy and picturesque corners of London. It is known for its many outdoor cafes, shops, stalls, markets and street performers who try to make the walk more pleasant for passers-by.

Originally, the land on which Covent Garden stands was known as the Convent Garden, a farmland where vegetables were harvested to feed the monks of nearby St Peter's Convent. In 1540 the land was confiscated by King Henry VIII and given to the first Earl of Bedford, John Baron Russell. In 1632 the fourth Earl of Bedford began to build London's first modern public square here, surrounding it with luxury buildings for the wealthier population.

During the year of the Great Fire of London many merchants whose businesses were destroyed moved to Covent Garden, occupying almost the entire square. In 1830 a building was constructed in the centre to house a market. Decades later the Flower Market was added.

Today, despite major changes, Covent Garden has become one of London's most popular entertainment centres. It has a large number of shops, most of them located along Floral Street. There are also lively restaurants, pubs and bars where you can eat or have a drink.

Museum-lovers will find the London Transport Museum here, while theatre-goers are in luck, as Covent Garden is also home to the London Theatre Museum and the Royal Opera House.

Underground with a stop at Covent Garden station.