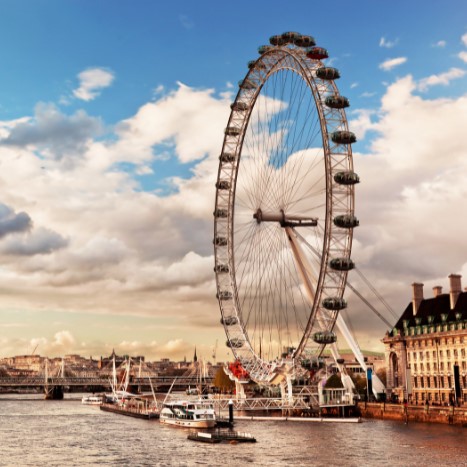 The London Eye, also known as the London Eye or Millennium Wheel, is a gigantic 135-metre high Ferris wheel located at the western end of Jubilee Gardens, on the bank of the Thames opposite the nearby Big Ben.

Despite its recent construction, it is already one of London's most popular tourist attractions. Its purpose was to commemorate the city's millennium celebrations. It was completed in 1999 but opened in 2000 after a year and a half construction process, which involved many tonnes of concrete for its foundations and steel for its structure.

The Ferris wheel has 32 spacious, egg-shaped, glass-enclosed cabins, which can accommodate up to 25 people. The entrance to the cabins is on the move, as the wheel rotates so slowly that there is no need to stop to pick up passengers.

The ride lasts 30 minutes and thanks to the transparent cabins, you get 360-degree views of the whole of London and the surrounding area. It is spectacular to get a bird's eye view of monuments and buildings such as St Paul's Cathedral, Buckingham Palace and the Palace of Westminster next to Big Ben.

It is advisable to book your tickets in advance to avoid surprises and be patient as the queues are usually quite long.

The entrance fee can be a little expensive for the more thrifty tourist, but it also includes a four-dimensional video exhibition of the city of London called the 4D Experience.