The Monument, London. Information about London 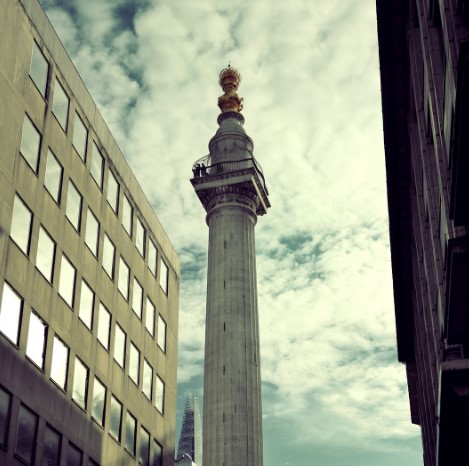 The Fire of London took place on 2 September 1666. The fire started in a small bakery in Pudding Lane and was not extinguished until 3 days after it broke out. This catastrophe almost completely destroyed the city, saving only a few stone buildings. In 1671, plans were made to build a monument to commemorate the tragic day. They finally decided on a Doric column, which was commissioned to the architect Christopher Wren, who finished the construction in 1677.

The column is made of Portland stone and measures 61 metres, which is the exact distance from the baker's house where the fateful fire started. At the top of the column is a huge flaming urn containing the ashes of the fire.

Inside the hollow column is a narrow spiral staircase with 345 steps leading to a terrace below the urn. This terrace is open to the public and offers impressive views of Tower Bridge and the city's financial district.