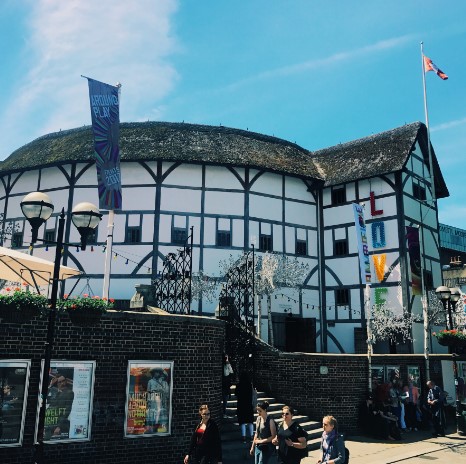 The Globe Theatre was originally the company theatre owned by the famous English playwright, poet and actor William Shakespeare. Officially opened in 1599, it had a capacity of over 3,000 people. Shakespeare performed many of his famous plays here and it became one of the most successful theatres in London.

After 14 years of operation, in 1613, as a result of a failure of one of the prop cannons during a performance of Henry VIII, a spark set fire to the wooden and thatched roof of the theatre, leaving it reduced to rubble. The theatre was rebuilt a year later. Bad luck once again befell this historic theatre. The Puritans, who did not believe in entertainment, closed it down in 1642 and demolished it two years later to build houses.

In 1989, excavation work unearthed the remains of this historic performance centre and years later, the renowned American actor and director Sam Wanamaker decided to fund and promote a recreation of the old theatre.

The current theatre
The current theatre is located on Bankside, just under 200 metres from the old one. It is built to Elizabethan plans. It retains the original structure, with a large circular open-air courtyard with three rows of seats around the ground floor and boxes on the two upper floors. It is the only building in London with thatched roofs since they were banned after the Great Fire of 1666.

Shakespeare's Globe Theatre is only open during the summer months for performances, from late April to October.

Guided tours are available all year round, but the only drawback is that the guides only speak English, which can be a bit boring for those who are not very familiar with the language. If you're an acting enthusiast, don't miss a performance of a play in this historic theatre that will take you back to Shakespeare's time.