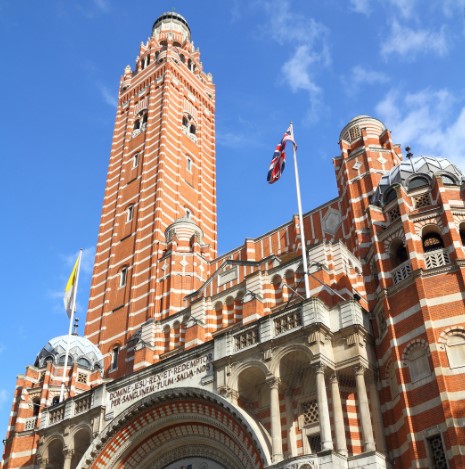 Westminster Cathedral is the house of worship of the Archdiocese of Westminster and the most important Catholic church in England and Wales. Many confuse the cathedral with Westminster Abbey, although the latter belongs to the Anglican Church.

The area on which this great cathedral stands was once a former prison site, the property of which was acquired in 1884 by the Catholic Church. Eleven years later, in 1895, the foundation stone was laid for what was to be the main church of the Catholic Church in Britain.

The architect responsible for the design of this neo-Byzantine church was John Francis Bentley, who travelled around the Mediterranean gathering ideas from different churches.

The different appearance of this cathedral is a far cry from what we are used to seeing. This is because the cardinal did not want the cathedral to resemble the nearby Westminster Abbey.

The façade is made of red brick and Portland stone. The most striking feature is the 83-metre high St Edward's Belfry.

The interior features over a hundred different types of marble, which make up the decoration and the spectacular carved columns. The eleven chapels and the vaults of the sanctuary are covered with beautiful Byzantine mosaics.

The Cathedral Choir is internationally known as one of the best in the world and is an extra attraction to visit this temple, where concerts are regularly held to the sound of its fantastic grand organ.