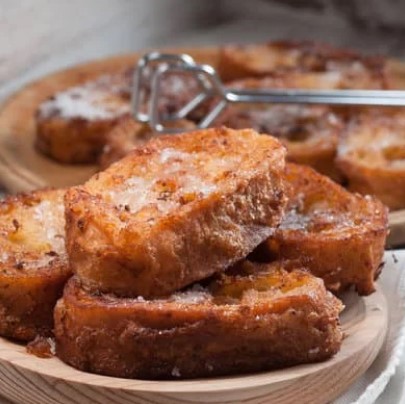 Cooking recipes - How to Torrijas?

Today we suggest you prepare the classic homemade torrijas at home so that the whole family can enjoy this very Spanish sweet. Your children can help to coat them in sugar and cinnamon. We are also going to see other torrijas recipes and also the recipe without eggs or milk.

Steps for making torrijas of milk:

** Instead of sugar and cinnamon you can sprinkle the torrijas with honey diluted with water.

How to make torrijas in the oven:

Once the torrijas are baked, transfer them to a serving dish and sprinkle with a mixture of sugar and cinnamon. This would be the most traditional version, but we are going to tell you a trick that we are sure you will like so that your torrijas are very juicy, which is to substitute the sugar and cinnamon for a few spoonfuls of the infused milk from the beginning, sprinkling the torrijas lightly over the top. I assure you that you will love them.

If someone in your family is vegan, or has an allergy or intolerance to eggs or milk, we also have a recipe especially for them. Check out the recipe for egg-free and dairy-free vegan torrijas.