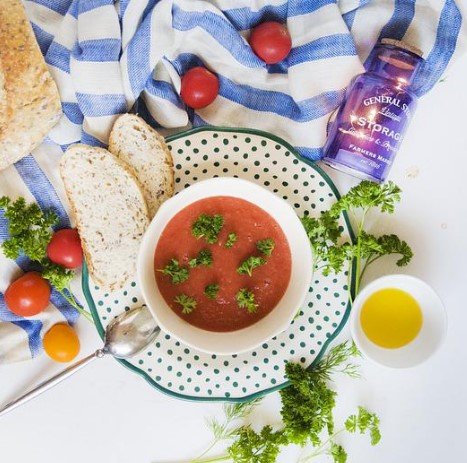 Andalusian gazpacho is one of the richest and most nutritious summer recipes in Spanish cuisine, and especially in the summer season, when the heat is at its peak, it is a refreshing recipe that provides us with a large amount of vitamins, minerals and antioxidants.

The characteristic orangey red colour of Andalusian gazpacho is mainly due to the tomato, which depending on the variety can have different intensities. But if you want your gazpacho to have an intense red colour, you can add some red pepper.

What variety of tomato is the best for making gazpacho? As it is one of the main ingredients, its flavour, which as you know varies greatly from one type to another, can undoubtedly influence the final result, so we do not recommend using just any tomato. Our recommendation is the pear tomato, as it has a thin skin, a lot of flesh and few pips. In addition, its flavour is not very acidic, so the result will be a gazpacho with a balanced flavour. Try to use ripe tomatoes because the flavour will be enhanced.

Andalusian gazpacho contains garlic, but it is important to control this, because if you overdo it with the amount of garlic the flavour can mask the flavour of other ingredients, as well as resulting in a very heavy digestion. To prevent the garlic from repeating, we recommend that you remove the central sprout from the garlic by cutting it lengthwise and removing it with the tip of a knife. This will prevent the garlic from repeating.