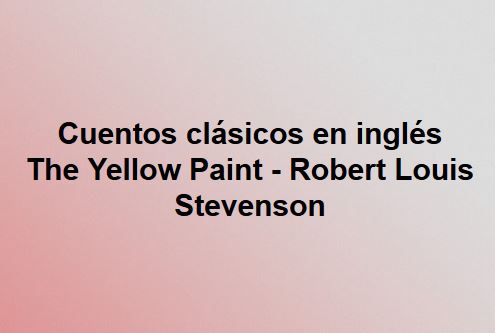 In a certain city there lived a physician who sold yellow paint. This was of so singular a virtue that whoso was bedaubed with it from head to heel was set free from the dangers of life, and the bondage of sin, and the fear of death for ever. So the physician said in his prospectus; and so said all the citizens in the city; and there was nothing more urgent in men's hearts than to be properly painted themselves, and nothing they took more delight in than to see others painted. There was in the same city a young man of a very good family but of a somewhat reckless life, who had reached the age of manhood, and would have nothing to say to the paint: "Tomorrow was soon enough," said he; and when the morrow came he would still put it off. She might have continued to do until his death; only, he had a friend of about his own age and much of his own manners; and this youth, taking a walk in the public street, with not one fleck of paint upon his body, was suddenly run down by a water-cart and cut off in the heyday of his nakedness. This shook the other to the soul; so that I never beheld a man more earnest to be painted; and on the very same evening, in the presence of all his family, to appropriate music, and himself weeping aloud, he received three complete coats and a touch of varnish on the top. The physician (who was himself affected even to tears) protested he had never done a job so thorough.

Some two months afterwards, the young man was carried on a stretcher to the physician's house.

"What is the meaning of this?" he cried, as soon as the door was opened. "I was to be set free from all the dangers of life; and here have I been run down by that self-same water-cart, and my leg is broken."

"Dear me!" said the physician. "This is very sad. But I perceive I must explain to you the action of my paint. A broken bone is a mighty small affair at the worst of it; and it belongs to a class of accident to which my paint is quite inapplicable. Sin, my dear young friend, sin is the sole calamity that a wise man should apprehend; it is against sin that I have fitted you out; and when you come to be tempted, you will give me news of my paint."
"Oh!" said the young man, "I did not understand that, and it seems rather disappointing. But I have no doubt all is for the best; and in the meanwhile, I shall be obliged to you if you will set my leg."

"That is none of my business," said the physician; "but if your bearers will carry you round the corner to the surgeon's, I feel sure he will afford relief."

Some three years later, the young man came running to the physician's house in a great perturbation. "What is the meaning of this?" he cried. "Here was I to be set free from the bondage of sin; and I have just committed forgery, arson and murder."

"Dear me," said the physician. "This is very serious. Off with your clothes at once." And as soon as the young man had stripped, he examined him from head to foot. "No," he cried with great relief, "there is not a flake broken. Cheer up, my young friend, your paint is as good as new."

"Good God!" cried the young man, "and what then can be the use of it?"

"Why," said the physician, "I perceive I must explain to you the nature of the action of my paint. It does not exactly prevent sin; it extenuates instead the painful consequences. It is not so much for this world, as for the next; it is not against life; in short, it is against death that I have fitted you out. And when you come to die, you will give me news of my paint."

"Oh!" cried the young man, "I had not understood that, and it seems a little disappointing. But there is no doubt all is for the best: and in the meanwhile, I shall be obliged if you will help me to undo the evil I have brought on innocent persons."
"That is none of my business," said the physician; "but if you will go round the corner to the police office, I feel sure it will afford you relief to give yourself up."

Six weeks later, the physician was called to the town gaol.

"What is the meaning of this?" cried the young man. "Here am I literally crusted with your paint; and I have broken my leg, and committed all the crimes in the calendar, and must be hanged tomorrow; and am in the meanwhile in a fear so extreme that I lack words to picture it."

"Dear me," said the physician. "This is really amazing. Well, well; perhaps, if you had not been painted, you would have been more frightened still."