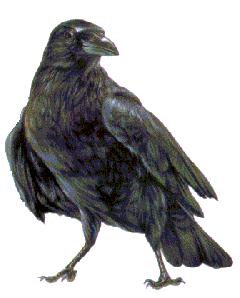 Once upon a time... a restless crow decided to go farther away than usual from home and friends. Suddenly, in a farmyard, he met a pair of peacocks. What wonderful birds they were! The crow had never seen such beautiful feathers, and he timidly asked the regal-looking birds what they were.

"We're peacocks," one of them replied, spreading its tail. And as the peacock strutted about, showing the crow his magnificent feathers, he screamed, as peacocks do. Bursting with admiration, the crow said goodbye and flapped away, but as he flew home, he could not forget the two peacocks. "What fine feathers! They must be so happy, being so beautiful." And he gazed down sadly at his own ugly plumes. From that day on, he could not help thinking about the spiendour of the peacocks and his own plain feathers. He even stopped looking at himself in the pond water, for every time he did so, it made him even more depressed. He got into the habit of spying on the peacocks, and the more he watched them strut royally around, the more envious he was of their beauty.

One day, he noticed that one of the peacocks had dropped a feather. When the sun went down, the crow picked it up and hid it away. For days on end, he watched the peacocks and found another feather. When he had four, he could wait no longer: he stuck the peacock feathers onto his own tail, using pine resin, and started to parade up and down for his friends to admire.

"Just look at my gorgeous tail!" he said proudly. "I'm not ugly like you! Out of my way, you moth eaten crows!" The crows' amazement soon changed to indignation, then they started to laugh and jeer at their vain companion. "You're nothing but a crow yourself, even with those flashy feathers!" they jeered. "And you're silly as well as ugly," replied the conceited crow haughtily, and off he went to live with the peacocks. When the peacocks set eyes on the stranger, they thought the crow was just another peacock who, for some reason, had lost most of his feathers, and they felt sorry for him. But the crow, vainer than ever, wanted to attract greater admiration and a foolish idea came into his head. He tried to scream the way the peacocks do when they fan their tails. But the harsh "Craw! Craw! Craw!" quickly betrayed the crow. The furious peacocks pecked the stolen feathers off and chased the crow away. Poor crow! For when, sad and downcast, he went back to his frlends, he was given exactly the same rough treatment. Nobody would speak to him and all the crows turned their backs on him for trying to be what he was not.