The Horse and the Wolf - El Caballo y el Lobo 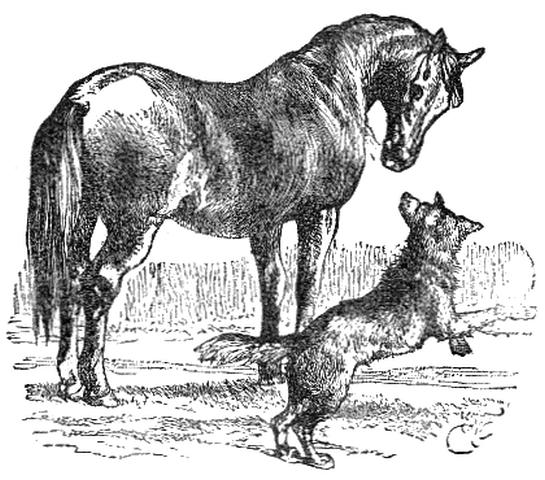 The Horse and the Wolf - El Caballo y el Lobo

Once upon a time... a horse was gazing peacefully in a rolling green meadow. A famished wolf passing by saw the horse and his mouth began to water.
"That's a fine horse! And will taste good too! He'd make a juicy steak! Pity he's so big. I don't think I'd manage to bring him down, though you never know..."
The wolf approached the horse, which continued to eat the grass. "...maybe, if I take him by surprise."

Now quite close, the wolf spoke to the horse, trying to sound as pleasant as he could.
"Good day, Mr. Horse, I see you're enjoying a meal. Is the grass good? I must say you're looking rather pale. Aren't you well?"
His mouth fool of grass, the horse replied: "Pale? Oh, no, that's my natural colour. I was born white and grey."
The wolf pretended not to understand what the horse had said. "Yes, indeed, very pale. It's just as well your master has given you a holiday in the field, instead of working."

"A holiday in the field? But I'm the picture of health!..."
The wolf was now circling round the horse, trying to find the best point to attack.
"I'm a doctor," he went on. "I can treat you. If you tell me where the pain is. I'm sure I can cure it. Take my advice. Let me examine you!"
The horse, who was not usually wary of others, became suspicious of the wolf's persistent remarks, and thought he had better be on his guard. The wolf was now very close and carefully biding his time, when the horse said, in alarm: "Yes! Now that think of it, I have a sore hind foot. It's been swollen for ages..."
Without a moment's thought, the wolf trotted up to the hoof which the horse had obligingly raised into the air. And when he was certain that the wolf had come within range, the horse gave a mighty kick, catching the wolf on the jawbone and sending him flying.

"Would like to examine me again?" The wolf heard the words as he struggled to his feet with spinning head.
"No thanks! That's enough for one day!" he mumbled, limping away, with no further thought for horse steaks.