The Purple Of The Balkan Kings - Saki - Classic Stories 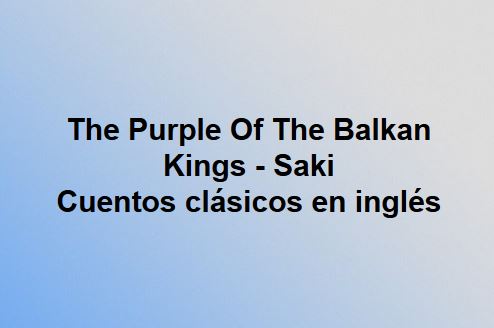 The Purple Of The Balkan Kings - Saki

Luitpold Wolkenstein, financier and diplomat on a small, obtrusive, self-important scale, sat in his favoured cafe in the world-wise Habsburg capital, confronted with the Neue Freie Presse and the cup of cream-topped coffee and attendant glass of water that a sleekheaded piccolo had just brought him. For years longer than a dog's lifetime sleek-headed piccolos had placed the Neue Freie Presse and a cup of cream-topped coffee on his table; for years he had sat at the same spot, under the dust-coated, stuffed eagle, that had once been a living, soaring bird on the Styrian mountains, and was now made monstrous and symbolical with a second head grafted on to its neck and a gilt crown planted on either dusty skull. To-day Luitpold Wolkenstein read no more than the first article in his paper, but read it again and again.

"The Turkish fortress of Kirk Kilisseh has fallen . . . The Serbs, it is officially announced, have taken Kumanovo . . . The fortress of Kirk Kilisseh lost, Kumanovo taken by the Serbs, these are tiding for Constantinople resembling something out of Shakspeare's tragedies of the kings . . . The neighbourhood of Adrianople and the Eastern region, where the great battle is now in progress, will not reveal merely the future of Turkey, but also what position and what influence the Balkan States are to have in the world."

For years longer than a dog's lifetime Luitpold Wolkenstein had disposed of the pretensions and strivings of the Balkan States over the cup of cream-topped coffee that sleek-headed piccolos had brought him. Never travelling further eastward than the horse-fair at Temesvar, never inviting personal risk in an encounter with anything more potentially desperate than a hare or partridge, he had constituted himself the critical appraiser and arbiter of the military and national prowess of the small countries that fringed the Dual Monarchy on its Danube border. And his judgment had been one of unsparing contempt for small-scale efforts, of unquestioning respect for the big battalions and full purses. Over the whole scene of the Balkan territories and their troubled histories had loomed the commanding magic of the words "the Great Powers" -- even more imposing in their Teutonic rendering, "Die Grossmachte."

Worshipping power and force and money-mastery as an elderly nerve-ridden woman might worship youthful physical energy, the comfortable, plump-bodied cafe-oracle had jested and gibed at the ambitions of the Balkan kinglets and their peoples, had unloosed against them that battery of strange lip-sounds that a Viennese employs almost as an auxiliary language to express the thoughts when his thoughts are not complimentary. British travellers had visited the Balkan lands and reported high things of the Bulgarians and their future, Russian officers had taken peeps at their army and confessed "this is a thing to be reckoned with, and it is not we who have created it, they have done it by themselves." But over his cups of coffee and his hour-long games of dominoes the oracle had laughed and wagged his head and distilled the worldly wisdom of his castle. The Grossmachte had not succeeded in stifling the roll of the war-drum, that was true; the big battalions of the Ottoman Empire would have to do some talking, and then the big purses and big threatenings of the Powers would speak and the last word would be with them. In imagination Luitpold heard the onward tramp of the red-fezzed bayonet bearers echoing through the Balkan passes, saw the little sheepskin-clad mannikins driven back to their villages, saw the augustly chiding spokesman of the Powers dictating, adjusting, restoring, settling things once again in their allotted places, sweeping up the dust of conflict, and now his ears had to listen to the war-drum rolling in quite another direction, had to listen to the tramp of battalions that were bigger and bolder and better skilled in war-craft than he had deemed possible in that quarter; his eyes had to read in the columns of his accustomed newspaper a warning to the Grossmachte that they had something new to learn, something new to reckon with, much that was time-honoured to relinquish. "The Great Powers will have not little difficulty in persuading the Balkan States of the inviolability of the principle that Europe cannot permit any fresh partition of territory in the East without her approval. Even now, while the campaign is still undecided, there are rumours of a project of fiscal unity, extending over the entire Balkan lands, and further of a constitutional union in imitation of the German Empire. That is perhaps only a political straw blown by the storm, but it is not possible to dismiss the reflection that the Balkan States leagued together command a military strength with which the Great Powers will have to reckon . . . The people who have poured out their blood on the battlefields and sacrificed the available armed men of an entire generation in order to encompass a union with their kinsfolk will not remain any longer in an attitude of dependence on the Great Powers or on Russia, but will go their own ways . . . The blood that has been poured forth to-day gives for the first time a genuine tone to the purple of the Balkan Kings. The Great Powers cannot overlook the fact that a people that has tasted victory will not let itself be driven back again within its former limits. Turkey has lost to-day not only Kirk Kilisseh and Kumanovo, but Macedonia also."

Luitpold Wolkenstein drank his coffee, but the flavour had somehow gone out of it. His world, his pompous, imposing, dictating world, had suddenly rolled up into narrower dimensions. The big purses and the big threats had been pushed unceremoniously on one side; a force that he could not fathom, could not comprehend, had made itself rudely felt. The august Caesars of Mammon and armament had looked down frowningly on the combat, and those about to die had not saluted, had no intention of saluting. A lesson was being imposed on unwilling learners, a lesson of respect for certain fundamental principles, and it was not the small struggling States who were being taught the lesson.

Luitpold Wolkenstein did not wait for the quorum of domino players to arrive. They would all have read the article in the Freie Presse. And there are moments when an oracle finds its greatest salvation in withdrawing itself from the area of human questioning.