The Image Of The Lost Soul - Saki - Classic Stories 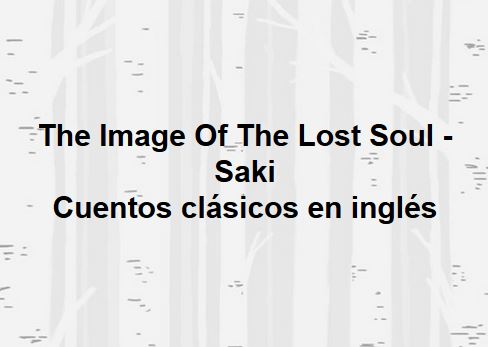 The Image Of The Lost Soul - Saki

There were a number of carved stone figures placed at intervals along the parapets of the old Cathedral; some of them represented angels, others kings and bishops, and nearly all were in attitudes of pious exaltation and composure. But one figure, low down on the cold north side of the building, had neither crown, mitre, not nimbus, and its face was hard and bitter and downcast; it must be a demon, declared the fat blue pigeons that roosted and sunned themselves all day on the ledges of the parapet; but the old belfry jackdaw, who was an authority on ecclesiastical architecture, said it was a lost soul. And there the matter rested.

One autumn day there fluttered on to the Cathedral roof a slender, sweet-voiced bird that had wandered away from the bare fields and thinning hedgerows in search of a winter roosting-place. It tried to rest its tired feet under the shade of a great angel-wing or to nestle in the sculptured folds of a kingly robe, but the fat pigeons hustled it away from wherever it settled, and the noisy sparrow-folk drove it off the ledges. No respectable bird sang with so much feeling, they cheeped one to another, and the wanderer had to move on.

Only the effigy of the Lost Soul offered a place of refuge. The pigeons did not consider it safe to perch on a projection that leaned so much out of the perpendicular, and was, besides, too much in the shadow. The figure did not cross its hands in the pious attitude of the other graven dignitaries, but its arms were folded as in defiance and their angle made a snug resting-place for the little bird. Every evening it crept trustfully into its corner against the stone breast of the image, and the darkling eyes seemed to keep watch over its slumbers. The lonely bird grew to love its lonely protector, and during the day it would sit from time to time on some rainshoot or other abutment and trill forth its sweetest music in grateful thanks for its nightly shelter. And, it may have been the work of wind and weather, or some other influence, but the wild drawn face seemed gradually to lose some of its hardness and unhappiness. Every day, through the long monotonous hours, the song of his little guest would come up in snatches to the lonely watcher, and at evening, when the vesper-bell was ringing and the great grey bats slid out of their hiding-places in the belfry roof, the brighteyed bird would return, twitter a few sleepy notes, and nestle into the arms that were waiting for him. Those were happy days for the Dark Image. Only the great bell of the Cathedral rang out daily its mocking message, "After joy . . . sorrow."
The folk in the verger's lodge noticed a little brown bird flitting about the Cathedral precincts, and admired its beautiful singing. "But it is a pity," said they, "that all that warbling should be lost and wasted far out of hearing up on the parapet." They were poor, but they understood the principles of political economy. So they caught the bird and put it in a little wicker cage outside the lodge door.

That night the little songster was missing from its accustomed haunt, and the Dark Image knew more than ever the bitterness of loneliness. Perhaps his little friend had been killed by a prowling cat or hurt by a stone. Perhaps . . . perhaps he had flown elsewhere. But when morning came there floated up to him, through the noise and bustle of the Cathedral world, a faint heart-aching message from the prisoner in the wicker cage far below. And every day, at high noon, when the fat pigeons were stupefied into silence after their midday meal and the sparrows were washing themselves in the street-puddles, the song of the little bird came up to the parapets -- a song of hunger and longing and hopelessness, a cry that could never be answered. The pigeons remarked, between mealtimes, that the figure leaned forward more than ever out of the perpendicular.

One day no song came up from the little wicker cage. It was the coldest day of the winter, and the pigeons and sparrows on the Cathedral roof looked anxiously on all sides for the scraps of food which they were dependent on in hard weather.

"Have the lodge-folk thrown out anything on to the dust-heap?" inquired one pigeon of another which was peering over the edge of the north parapet.

"Only a little dead bird," was the answer.

There was a crackling sound in the night on the Cathedral roof and a noise as of falling masonry. The belfry jackdaw said the frost was affecting the fabric, and as he had experienced many frosts it must have been so. In the morning it was seen that the Figure of the Lost Soul had toppled from its cornice and lay now in a broken mass on the dustheap outside the verger's lodge.
"It is just as well," cooed the fat pigeons, after they had peered at the matter for some minutes; "now we shall have a nice angel put up there. Certainly they will put an angel there."