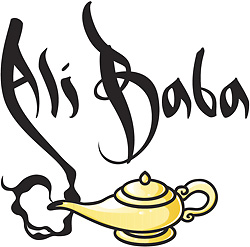 Once upon a time . . . in a distant Persian city lived two brothers called Ali Baba and Kasim. Ali Baba was terribly poor, and he lived with his wife in a mud hut. He picked up sticks in the woods and sold them in bundles at the market.
Kasim, however, had a rich wife, and he lived in a big fine house and sold carpets. He became richer than ever. One day, as Ali Baba was gathering sticks in a wood some way from the city he heard a band of horsemen gallop towards him. Scared that he might be in trouble for stealing wood, he scrambled up a tree and hid amongst the foliage, seconds before the men, armed to the teeth, rode underneath.