Hanukkah: Meaning and rituals of the Jewish festival of lights 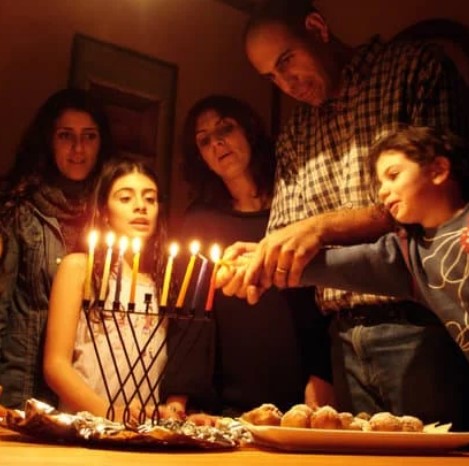 "HAPPY HANUKKAH". This year, the Hanukkah festival of lights begins before December. Date, wishes, prayers or even the meaning of the "miracle of the vial of oil".

This year, Hanukkah, also known as the "Jewish festival of lights", runs from Sunday 28 November (evening) to Monday 6 December. This is because this celebration lasts eight days. Its date varies every year, because the Jewish calendar is based on the Moon, as opposed to the Sun in the Latin calendar. The programme of Jewish liturgy during this interlude includes songs and blessings, food fried in oil and, above all, the traditional Jewish candlestick. Called the "menorah", it has nine branches. On each night of the eight days, believers light one of them (the first one is lit on the eve of the first full day of Hanukkah, which is the evening of 28 November this year). By lighting up the menorah a little more each day, the followers of Judaism commemorate what they consider to be "the miracle of lights".

The Jewish celebration of Hanukkah takes place over eight days, from the 25th of Kislev to the 2nd of Tebeth in the Hebrew calendar. Generally, this festive period corresponds to one week of December in the Gregorian calendar currently used in our countries, and is not far from St Nicholas' Day on 6 December. As Hanukkah takes place in winter shortly before Christmas, it has often been seen as the "Advent of Israel", contextualises the French Jewish-Israeli poet Claude Vigée in the book "Un panier de houblon". The first candle of Hanukkah is lit on the eve of 25 Kislev. A central candleholder then lights the lights of the eight other branches, one day at a time.

In 2021, Hanukkah begins on Sunday 28 November and lasts until Monday 6 December. The celebration therefore takes place several months after Yom Kippur, or Day of Atonement, which is considered by believers to be the "holiest of Jewish holidays" and will be celebrated in 2021 on 15 and 16 September. In 2016, the Jewish Festival of Lights began on Christmas Eve, a Saturday, in the middle of Shabbat.

What is the meaning and origin of Hanukkah?

Symbolically, the gradual lighting of the traditional candlestick or the making of oil dishes (latkes, potato cakes, and other doughnuts) for Hanukkah commemorate the "miracle of the oil jar". For believers in Judaism, this miracle took place 23 centuries ago, after the Jews re-dedicated the Temple of Israel. The Jews had just recovered the temple after an unexpected victory over the Greek-Syrian troops of Antiochus Epiphanes, who sought to subdue them. In the Judaic story, a small vial found far away from the temple is used to light the place of worship for eight days in exchange for a normal one.

During Hanukkah, the usual liturgy does not give rise to an additional prayer service: without a holy character and not a holiday apart from Israel, this festival is not linked to any prayer ritual indicated in the Bible. It is said to be rabbinical and not biblical. However, several readings are added to the ordinary liturgy, varying over time, to signal that Hanukkah is taking place. In the synagogue, special prayers are recited, such as Al Hanissim, a blessing that is part of the Amida, the morning service prayer, but also the Birkat Hamazon, the Jewish post-meal prayer; the Hallel, which is read every day in its entirety, as a form of praise and thanksgiving, and is used on joyous Jewish holidays; or the reading of specific passages from the Torah, such as the one on the sacrifices made at the time of the inauguration of the Temple. The Temple had just been returned to the Jews after they regained their independence from the Greeks in the second century BC.

How do you wish for a happy Hanukkah? To wish each other a happy Hanukkah, the faithful usually say "Hag Sameah" or "Hanukkah Sameah". And if you want to take it a step further, give your friend or boyfriend a menorah celebrating Hanukkah, the inexpensive traditional candlestick, and the candles that go with it. Making doughnuts with mint tea is also a great way to celebrate the Festival of Lights. But don't panic: for each 'edition' of these festivities, you have eight days to give a Hanukkah surprise to any loved ones that may be involved...