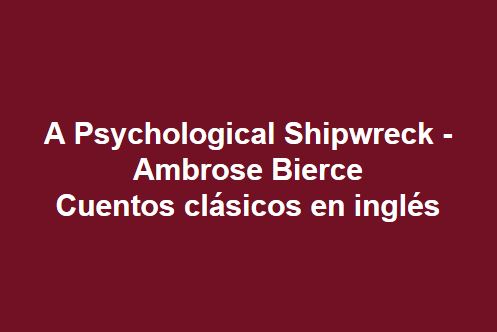 In the summer of 1874 I was in Liverpool, whither I had gone on business for the mercantile house of Bronson & Jarrett, New York. I am William Jarrett; my partner was Zenas Bronson. The firm failed last year, and unable to endure the fall from affluence to poverty he died.

Having finished my business, and feeling the lassitude and exhaustion incident to its dispatch, I felt that a protracted sea voyage would be both agreeable and beneficial, so instead of embarking for my return on one of the many fine passenger steamers I booked for New York on the sailing vessel Morrow, upon which I had shipped a large and valuable invoice of the goods I had bought. The Morrow was an English ship with, of course, but little accommodation for passengers, of whom there were only myself, a young woman and her servant, who was a middle-aged negress. I thought it singular that a travelling English girl should be so attended, but she afterward explained to me that the woman had been left with her family by a man and his wife from South Carolina, both of whom had died on the same day at the house of the young lady's father in Devonshire -- a circumstance in itself sufficiently uncommon to remain rather distinctly in my memory, even had it not afterward transpired in conversation with the young lady that the name of the man was William Jarrett, the same as my own. I knew that a branch of my family had settled in South Carolina, but of them and their history I was ignorant.

The Morrow sailed from the mouth of the Mersey on the 15th of June, and for several weeks we had fair breezes and unclouded skies. The skipper, an admirable seaman but nothing more, favoured us with very little of his society, except at his table; and the young woman, Miss Janette Harford, and I became very well acquainted. We were, in truth, nearly always together, and being of an introspective turn of mind I often endeavoured to analyse and define the novel feeling with which she inspired me -- a secret, subtle, but powerful attraction which constantly impelled me to seek her; but the attempt was hopeless. I could only be sure that at least it was not love. Having assured myself of this and being certain that she was quite as whole-hearted, I ventured one evening (I remember it was on the 3rd of July) as we sat on deck to ask her, laughingly, if she could assist me to resolve my psychological doubt.
For a moment she was silent, with averted face, and I began to fear I had been extremely rude and indelicate; then she fixed her eyes gravely on my own. In an instant my mind was dominated by as strange a fancy as ever entered human consciousness. It seemed as if she were looking at me, not with, but through, those eyes -- from an immeasurable distance behind them -- and that a number of other persons, men, women and children, upon whose faces I caught strangely familiar evanescent expressions, clustered about her, struggling with gentle eagerness to look at me through the same orbs. Ship, ocean, sky -- all had vanished. I was conscious of nothing but the figures in this extraordinary and fantastic scene. Then all at once darkness fell upon me, and anon from out of it, as to one who grows accustomed by degrees to a dimmer light, my former surroundings of deck and mast and cordage slowly resolved themselves. Miss Harford had closed her eyes and was leaning back in her chair, apparently asleep, the book she had been reading open in her lap. Impelled by surely I cannot say what motive, I glanced at the top of the page; it was a copy of that rare and curious work, Denneker's Meditations, and the lady's index finger rested on this passage:

'To sundry it is given to be drawn away, and to be apart from the body for a season; for, as concerning rills which would flow across each other the weaker is borne along by the stronger, so there be certain of kin whose paths intersecting, their souls do bear company, the while their bodies go foreappointed ways, unknowing.'

Miss Harford arose, shuddering; the sun had sunk below the horizon, but it was not cold. There was not a breath of wind; there were no clouds in the sky, yet not a star was visible. A hurried tramping sounded on the deck; the captain, summoned from below, joined the first officer, who stood looking at the barometer. 'Good God!' I heard him exclaim.

An hour later the form of Janette Harford, invisible in the darkness and spray, was torn from my grasp by the cruel vortex of the sinking ship, and I fainted in the cordage of the floating mast to which I had lashed myself.
It was by lamplight that I awoke. I lay in a berth amid the familiar surroundings of the state-room of a steamer. On a couch opposite sat a man, half undressed for bed, reading a book. I recognized the face of my friend Gordon Doyle, whom I had met in Liverpool on the day of my embarkation, when he was himself about to sail on the steamer City of Prague, on which he had urged me to accompany him.

After some moments I now spoke his name. He simply said, 'Well,' and turned a leaf in his book without removing his eyes from the page.

He now deigned to look at me and smiled as if amused. He evidently thought me but half awake.

His amusement turned to amazement; he stared at me fixedly, saying nothing.

A moment later I asked: 'What ship is this? ' Doyle stared again. 'The steamer City of Prague, bound from Liverpool to New York, three weeks out with a broken shaft. Principal passenger, Mr. Gordon Doyle; ditto lunatic, Mr. William Jarrett. These two distinguished travellers embarked together, but they are about to part, it being the resolute intention of the former to pitch the latter overboard.'

I sat bolt upright. 'Do you mean to say that I have been for three weeks a passenger on this steamer?'

'Right as a trivet all the time, and punctual at your meals.'

'My God! Doyle, there is some mystery here; do have the goodness to be serious. Was I not rescued from the wreck of the ship Morrow?'
Doyle changed colour, and approaching me, laid his fingers on my wrist. A moment later, 'What do you know of Janette Harford?' he asked very calmly.

'First tell me what you know of her?'

Mr. Doyle gazed at me for some moments as if thinking what to do, then seating himself again on the couch, said:

'Why should I not? I am engaged to marry Janette Harford, whom I met a year ago in London. Her family, one of the wealthiest in Devonshire, cut up rough about it, and we eloped -- are eloping rather, for on the day that you and I walked to the landing stage to go aboard this steamer she and her faithful servant, a negress, passed us, driving to the ship Morrow. She would not consent to go in the same vessel with me, and it had been deemed best that she take a sailing vessel in order to avoid observation and lessen the risk of detection. I am now alarmed lest this cursed breaking of our machinery may detain us so long that the Morrow will get to New York before us, and the poor girl will not know where to go.'

I lay still in my berth -- so still I hardly breathed. But the subject was evidently not displeasing to Doyle, and after a short pause he resumed:

'By the way, she is only an adopted daughter of the Harfords. Her mother was killed at their place by being thrown from a horse while hunting, and her father, mad with grief, made away with himself the same day. No one ever claimed the child, and after a reasonable time they adopted her. She has grown up in the belief that she is their daughter.'

'Doyle, what book are you reading? '

'Oh, it's called Denneker's Meditations. It's a rum lot, Janette gave it to me; she happened to have two copies. Want to see it?'
He tossed me the volume, which opened as it fell. On one of the exposed pages was a marked passage:

'To sundry it is given to be drawn away, and to be apart from the body for a season; for, as concerning rills which would flow across each other the weaker is borne along by the stronger, so there be certain of kin whose paths intersecting, their souls do bear company, the while their bodies go foreappointed ways, unknowing.'

'She had -- she has -- a singular taste in reading,' I managed to say, mastering my agitation.

'Yes. And now perhaps you will have the kindness to explain how you knew her name and that of the ship she sailed in.'

'You talked of her in your sleep,' I said.

A week later we were towed into the port of New York. But the Morrow was never heard from.