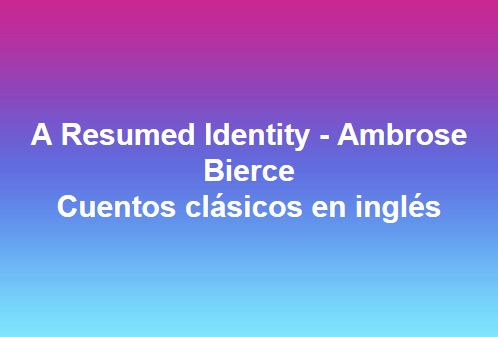 I. The Review as a Form of Welcome

One summer night a man stood on a low hill overlooking a wide expanse of forest and field. By the full moon hanging low in the west he knew what he might not have known otherwise: that it was near the hour of dawn. A light mist lay along the earth, partly veiling the lower features of the landscape, but above it the taller trees showed in well-defined masses against a clear sky. Two or three farmhouses were visible through the haze, but in none of them, naturally, was a light. Nowhere, indeed, was any sign or suggestion of life except the barking of a distant dog, which, repeated with mechanical iteration, served rather to accentuate than dispel the loneliness of the scene.

The man looked curiously about him on all sides, as one who among familiar surroundings is unable to determine his exact place and part in the scheme of things. It is so, perhaps, that we shall act when, risen from the dead, we await the call to judgment.

A hundred yards away was a straight road, showing white in the moonlight. Endeavouring to orient himself, as a surveyor or navigator might say, the man moved his eyes slowly along its visible length and at a distance of a quarter-mile to the south of his station saw, dim and grey in the haze, a group of horsemen riding to the north. Behind them were men afoot, marching in column, with dimly gleaming rifles aslant above their shoulders. They moved slowly and in silence. Another group of horsemen, another regiment of infantry, another and another -- all in unceasing motion toward the man's point of view, past it, and beyond. A battery of artillery followed, the cannoneers riding with folded arms on limber and caisson. And still the interminable procession came out of the obscurity to south and passed into the obscurity to north, with never a sound of voice, nor hoof, nor wheel.

The man could not rightly understand: he thought himself deaf; said so, and heard his own voice, although it had an unfamiliar quality that almost alarmed him; it disappointed his ear's expectancy in the matter of timbre and resonance. But he was not deaf, and that for the moment sufficed.
Then he remembered that there are natural phenomena to which some one has given the name 'acoustic shadows.' If you stand in an acoustic shadow there is one direction from which you will hear nothing. At the battle of Gaines's Mill, one of the fiercest conflicts of the Civil War, with a hundred guns in play, spectators a mile and a half away on the opposite side of the Chickahominy Valley heard nothing of what they clearly saw. The bombardment of Port Royal, heard and felt at St. Augustine, a hundred and fifty miles to the south, was inaudible two miles to the north in a still atmosphere. A few days before the surrender at Appomattox a thunderous engagement between the commands of Sheridan and Pickett was unknown to the latter commander, a mile in the rear of his own line.

These instances were not known to the man of whom we write, but less striking ones of the same character had not escaped his observation. He was profoundly disquieted, but for another reason than the uncanny silence of that moonlight march.

'Good Lord! ' he said to himself -- and again it was as if another had spoken his thought -- 'if those people are what I take them to be we have lost the battle and they are moving on Nashville!'

Then came a thought of self -- an apprehension -- a strong sense of personal peril, such as in another we call fear. He stepped quickly into the shadow of a tree. And still the silent battalions moved slowly forward in the haze.

The chill of a sudden breeze upon the back of his neck drew his attention to the quarter whence it came, and turning to the east he saw a faint grey light along the horizon -- the first sign of returning day. This increased his apprehension.

'I must get away from here,' he thought, 'or I shall be discovered and taken.'

He moved out of the shadow, walking rapidly toward the greying east. From the safer seclusion of a clump of cedars he looked back. The entire column had passed out of sight: the straight white road lay bare and desolate in the moonlight!
Puzzled before, he was now inexpressibly astonished. So swift a passing of so slow an army! -- he could not comprehend it. Minute after minute passed unnoted; he had lost his sense of time. He sought with a terrible earnestness a solution of the mystery, but sought in vain. When at last he roused himself from his abstraction the sun's rim was visible above the hills, but in the new conditions he found no other light than that of day; his understanding was involved as darkly in doubt as before.

On every side lay cultivated fields showing no sign of war and war's ravages. From the chimneys of the farmhouses thin ascensions of blue smoke signalled preparations for a day's peaceful toil. Having stilled its immemorial allocution to the moon, the watch-dog was assisting a negro who, prefixing a team of mules to the plough, was flatting and sharping contentedly at his task. The hero of this tale stared stupidly at the pastoral picture as if he had never seen such a thing in all his life; then he put his hand to his head, passed it through his hair and, withdrawing it, attentively considered the palm -- a singular thing to do. Apparently reassured by the act, he walked confidently toward the road.

II. When You have Lost Your Life Consult a Physician

Dr. Stilling Malson, of Murfreesboro, having visited a patient six or seven miles away, on the Nashville road, had remained with him all night. At daybreak he set out for home on horseback, as was the custom of doctors of the time and region. He had passed into the neighbourhood of Stone's River battlefield when a man approached him from the roadside and saluted in the military fashion, with a movement of the right hand to the hat-brim. But the hat was not a military hat, the man was not in uniform and had not a martial bearing. The doctor nodded civilly, half thinking that the stranger's uncommon greeting was perhaps in deference to the historic surroundings. As the stranger evidently desired speech with him he courteously reined in his horse and waited.

'Sir,' said the stranger, 'although a civilian, you are perhaps an enemy.'
'I am a physician,' was the non-committal reply.

'Thank you,' said the other. 'I am a lieutenant, of the staff of General Hazen.' He paused a moment and looked sharply at the person whom he was addressing, then added, 'Of the Federal army.' The physician merely nodded.

'Kindly tell me,' continued the other, 'what has happened here. Where are the armies? Which has won the battle?'

The physician regarded his questioner curiously with half-shut eyes. After a professional scrutiny, prolonged to the limit of politeness, 'Pardon me,' he said; 'one asking information should be willing to impart it. Are you wounded?' he added, smiling.

The man removed the unmilitary hat, put his hand to his head, passed it through his hair and, withdrawing it, attentively considered the palm.

'I was struck by a bullet and have been unconscious. It must have been a light, glancing blow: I find no blood and feel no pain. I will not trouble you for treatment, but will you kindly direct me to my command -- to any part of the Federal army -- if you know?'

Again the doctor did not immediately reply: he was recalling much that is recorded in the books of his profession -- something about lost identity and the effect of familiar scenes in restoring it. At length he looked the man in the face, smiled, and said:

'Lieutenant, you are not wearing the uniform of your rank and service.'

At this the man glanced down at his civilian attire, lifted his eyes, and said with hesitation:

Still regarding him sharply but not unsympathetically, the man of science bluntly inquired:

'You don't look it; I should hardly have guessed you to be just that.'

The man was growing impatient. 'We need not discuss that,' he said: 'I want to know about the army. Not two hours ago I saw a column of troops moving northward on this road. You must have met them. Be good enough to tell me the colour of their clothing, which I was unable to make out, and I'll trouble you no more.'

'You are quite sure that you saw them?'

'Sure? My God, sir, I could have counted them!'

'Why, really,' said the physician, with an amusing consciousness of his own resemblance to the loquacious barber of the Arabian Nights, 'this is very interesting. I met no troops.'

The man looked at him coldly, as if he had himself observed the likeness to the barber. 'It is plain,' he said, 'that you do not care to assist me. Sir, you may go to the devil!'

He turned and strode away, very much at random, across the dewy fields, his half-penitent tormentor quietly watching him from his point of vantage in the saddle till he disappeared beyond an array of trees.

III. The Danger of Looking into a Pool of Water

After leaving the road the man slackened his pace, and now went forward, rather deviously, with a distinct feeling of fatigue. He could not account for this, though truly the interminable loquacity of that country doctor offered itself in explanation. Seating himself upon a rock, he laid one hand upon his knee, back upward, and casually looked at it. It was lean and withered. He lifted both hands to his face. It was seamed and furrowed; he could trace the lines with the tips of his fingers. How strange! -- a mere bullet-stroke and a brief unconsciousness should not make one a physical wreck.
'I must have been a long time in hospital,' he said aloud. 'Why, what a fool I am! The battle was in December, and it is now summer!' He laughed. 'No wonder that fellow thought me an escaped lunatic. He was wrong: I am only an escaped patient.'

At a little distance a small plot of ground enclosed by a stone wall caught his attention. With no very definite intent he rose and went to it. In the centre was a square, solid monument of hewn stone. It was brown with age, weather-worn at the angles, spotted with moss and lichen. Between the massive blocks were strips of grass the leverage of whose roots had pushed them apart. In answer to the challenge of this ambitious structure Time had laid his destroying hand upon it, and it would soon be 'one with Nineveh and Tyre.' In an inscription on one side his eye caught a familiar name. Shaking with excitement, he craned his body across the wall and read:

The man fell back from the wall, faint and sick. Almost within an arm's length was a little depression in the earth; it had been filled by a recent rain -- a pool of clear water. He crept to it to revive himself, lifted the upper part of his body on his trembling arms, thrust forward his head and saw the reflection of his face, as in a mirror. He uttered a terrible cry. His arms gave way; he fell, face downward, into the pool and yielded up the life that had spanned another life.