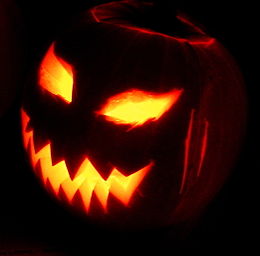 It was a dark, rainy night at eight o’clock on the thirty-first of October. Andy and his friend Paul were walking home together as usual. But this night was different. It was Halloween. As they were walking along a large, black cat jumped out in front of them and ran off into the night. They looked up into the sky and saw a light shining. It glowed red, then blue then green and gold. “What was it?” they wondered.

The air felt still and cold. It had stopped raining and everything was creepy. It felt like something was going to happen. Andy and Paul went past a very old house. It was a huge old house which was deserted. The house lay in a big, shadowy garden, surrounded by trees. As they were going past the house they heard a strange noise. It was a long, low howling noise. "Maybe it's a dog," said Paul, trying not to be scared. "It must be in trouble. Let's go and see," said Andy. They passed through the old rusty gates and crept along the path towards the door of the house. It was so dark that they could hardly see. The wind whistled through the trees. Again they heard the low howling sound, coming from the house. Oooooh! Oooooh! "I don't think it's a dog," said Andy. "You're just a scaredy cat!" said Paul. "Come on, let's go inside." They went up the stairs and pushed open the front door. It creaked loudly and fell open with a bang. The air felt cool and clammy and creepy. Paul walked into the hallway. An enormous spider's web hit him in the face and he screamed. "Aaagh!" "It's only a spider's web," said Andy. They went into a large room on the ground floor. On the wall over the fireplace hung a huge mirror. They looked into the mirror and saw lights dancing inside it. Then suddenly a huge ghostly head came out of the mirror and tried to grab them! 'Aaagh!' they both screamed and turned and ran to the front door - but it was shut! What was happening to them? Then they heard the howling noise again. It was coming from upstairs. They had no choice. They tiptoed silently up the stairs. They listened again. The noise was coming from a room at the end of the corridor. They moved slowly towards the door. They felt really afraid. What would they see? What horrible thing would they find behind the door? They went into the room. They couldn't believe their eyes. They saw the most amazing collection of witches and monsters and ghosts - and they were all having a party! The witches were disco dancing, the wizards were drinking their special brew and jumping around, the monsters were eating exploding lollipops and other exciting sweets. There were bats wing cocktails, worm-flavoured crisps and pumpkin surprise pizzas. In fact there was everything for a Halloween party. They found out that the howling noise was a ghost called Grimly, who was providing the singing entertainment for the evening. Paul and Andy drank several bats wing cocktails and then Paul danced with the ugliest witch at the party - she had a green head and no teeth. Andy danced with a spectacular purple headed monster who taught him a new dance called the 'Monster Boogie'. Everyone had a wonderful time and danced until dawn. When the sun came up they all went off to their ghostly homes agreeing that it was the best Halloween party ever. "See you next year," they shouted to Paul and Andy, "and Happy Halloween!"