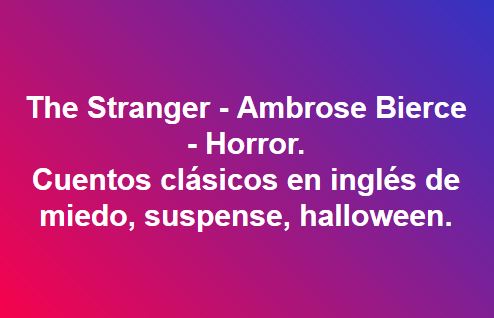 A man stepped out of the darkness into the little illuminated circle about our failing camp-fire and seated himself upon a rock.

'You are not the first to explore this region,' he said gravely.

Nobody controverted his statement; he was himself proof of its truth, for he was not of our party and must have been somewhere near when we camped. Moreover, he must have companions not far away; it was not a place where one would be living or travelling alone. For more than a week we had seen, besides ourselves and our animals, only such living things as rattlesnakes and horned toads. In an Arizona desert one does not long coexist with only such creatures as these: one must have pack animals, supplies, arms -- 'an outfit.' And all these imply comrades. It was perhaps a doubt as to what manner of men this unceremonious stranger's comrades might be, together with something in his words interpretable as a challenge that caused every man of our half-dozen 'gentlemen adventurers' to rise to a sitting posture and lay his hand upon a weapon -- an act signifying, in that time and place, a policy of expectation. The stranger gave the matter no attention and began again to speak in the same deliberate, uninflected monotone in which he had delivered his first sentence:

The man repeated the names slowly and distinctly, as if to fix them in the memories of his audience, every member of which was now attentively observing him, but with a slackened apprehension regarding his possible companions somewhere in the darkness that seemed to enclose us like a black wall; in the manner of this volunteer historian was no suggestion of an unfriendly purpose. His act was rather that of a harmless lunatic than an enemy. We were not so new to the country as not to know that the solitary life of many a plainsman had a tendency to develop eccentricities of conduct and character not always easily distinguishable from mental aberration. A man is like a tree: in a forest of his fellows he will grow as straight as his generic and individual nature permits; alone in the open, he yields to the deforming stresses and tortions that environ him. Some such thoughts were in my mind as I watched the man from the shadow of my hat, pulled low to shut out the firelight. A witless fellow, no doubt, but what could he be doing there in the heart of a desert?
Having undertaken to tell this story, I wish that I could describe the man's appearance; that would be a natural thing to do. Unfortunately, and somewhat strangely, I find myself unable to do so with any degree of confidence, for afterward no two of us agreed as to what he wore and how he looked; and when I try to set down my own impressions they elude me. Anyone can tell some kind of story; narration is one of the elemental powers of the race. But the talent for description is a gift.

Nobody having broken silence the visitor went on to say:

'This country was not then what it is now. There was not a ranch between the Gila and the Gulf. There was a little game here and there in the mountains, and near the infrequent water-holes grass enough to keep our animals from starvation. If we should be so fortunate as to encounter no Indians we might get through. But within a week the purpose of the expedition had altered from discovery of wealth to preservation of life. We had gone too far to go back, for what was ahead could be no worse than what was behind; so we pushed on, riding by night to avoid Indians and the intolerable heat, and concealing ourselves by day as best we could. Sometimes, having exhausted our supply of wild meat and emptied our casks, we were days without food or drink; then a water-hole or a shallow pool in the bottom of an arroyo so restored our strength and sanity that we were able to shoot some of the wild animals that sought it also. Sometimes it was a bear, sometimes an antelope, a coyote, a cougar-that was as God pleased; all were food.

'One morning as we skirted a mountain range, seeking a practicable pass, we were attacked by a band of Apaches who had followed our trail up a gulch -- it is not far from here. Knowing that they outnumbered us ten to one, they took none of their usual cowardly precautions, but dashed upon us at a gallop, firing and yelling. Fighting was out of the question: we urged our feeble animals up the gulch as far as there was footing for a hoof, then threw ourselves out of our saddles and took to the chaparral on one of the slopes, abandoning our entire outfit to the enemy. But we retained our rifles, every man -- Ramon Gallegos, William Shaw, George W. Kent, and Berry Davis.'
'Same old crowd,' said the humorist of our party. He was an Eastern man, unfamiliar with the decent observances of social intercourse. A gesture of disapproval from our leader silenced him, and the stranger proceeded with his tale:

'The savages dismounted also, and some of them ran up the gulch beyond the point at which we had left it, cutting off further retreat in that direction and forcing us on up the side. Unfortunately the chaparral extended only a short distance up the slope, and as we came into the open ground above we took the fire of a dozen rifles; but Apaches shoot badly when in a hurry, and God so willed it that none of us fell. Twenty yards up the slope, beyond the edge of the brush, were vertical cliffs, in which, directly in front of us, was a narrow opening. Into that we ran, finding ourselves in a cavern about as large as an ordinary room in a house. Here for a time we were safe: a single man with a repeating rifle could defend the entrance against all the Apaches in the land. But against hunger and thirst we had no defence. Courage we still had, but hope was a memory.

'Not one of those Indians did we afterward see, but by the smoke and glare of their fires in the gulch we knew that by day and by night they watched with ready rifles in the edge of the bush -- knew that if we made a sortie not a man of us would live to take three steps into the open. For three days, watching in turn, we held out before our suffering became insupportable. Then -- It was the morning of the fourth day -- Ramon Gallegos said:

'"Senores, I know not well of the good God and what please Him. I have live without religion, and I am not acquaint with that of you. Pardon, senores, if I shock you, but for me the time is come to beat the game of the Apache."

'He knelt upon the rock floor of the cave and pressed his pistol against his temple. "Madre de Dios," he said, "comes now the soul of Ramon Gallegos."
'And so he left us -- William Shaw, George W. Kent, and Berry Davis.

'I was the leader: it was for me to speak.

'"He was a brave man," I said --"he knew when to die, and how. It is foolish to go mad from thirst and fall by Apache bullets, or be skinned alive -- it is in bad taste. Let us join Ramon Gallegos."

'"That is right," said William Shaw.

'I straightened the limbs of Ramon Gallegos and put a handkerchief over his face. Then William Shaw said: "I should like to look like that -- a little while."

'And George W. Kent said that he felt that way, too.

'"It shall be so," I said: "the red devils will wait a week. William Shaw and George W. Kent, draw and kneel."

'They did so and I stood before them.

'"Forgive us our sins," said they.

'"And receive our souls."

'"And receive our souls."

'I laid them beside Ramon Gallegos and covered their faces.'

There was a quick commotion on the opposite side of the camp-fire: one of our party had sprung to his feet, pistol in hand.
'And you!' he shouted -- 'you dared to escape? -- you dare to be alive? You cowardly hound, I'll send you to join them if I hang for it!'

But with the leap of a panther the captain was upon him, grasping his wrist. 'Hold it in, Sam Yountsey, hold it in!'

We were now all upon our feet -- except the stranger, who sat motionless and apparently inattentive. Some one seized Yountsey's other arm.

'Captain,' I said, 'there is something wrong here. This fellow is either a lunatic or merely a liar -- just a plain, everyday liar whom Yountsey has no call to kill. If this man was of that party it had five members, one of whom -- probably himself -- he has not named.'

'Yes,' said the captain, releasing the insurgent, who sat down, 'there is something -- unusual. Years ago four dead bodies of white men, scalped and shamefully mutilated, were found about the mouth of that cave. They are buried there; I have seen the graves -- we shall all see them tomorrow.'

The stranger rose, standing tall in the light of the expiring fire, which in our breathless attention to his story we had neglected to keep going.

With this reiterated roll-call of the dead he walked into the darkness and we saw him no more. At that moment one of our party, who had been on guard, strode in among us, rifle in hand and somewhat excited.

'Captain,' he said, 'for the last half-hour three men have been standing out there on the mesa.' He pointed in the direction taken by the stranger. 'I could see them distinctly, for the moon is up, but as they had no guns and I had them covered with mine I thought it was their move. They have made none, but damn it! they have got on to my nerves.'
'Go back to your post, and stay till you see them again,' said the captain. 'The rest of you lie down again, or I'll kick you all into the fire.'

The sentinel obediently withdrew, swearing, and did not return. As we were arranging our blankets the fiery Yountsey said: 'I beg your pardon, Captain, but who the devil do you take them to be? '

'But how about Berry Davis? I ought to have shot him.'

'Quite needless; you couldn't have made him any deader. Go to sleep.'