The Masque of the Red Death - Edgar Allan Poe 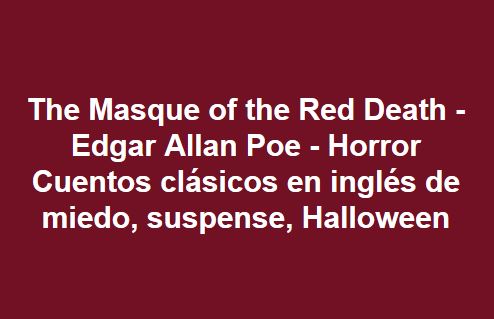 The Masque of the Red Death - Edgar Allan Poe - Horror

The 'Red Death' had long devastated the country. No pestilence had ever been so fatal, or so hideous. Blood was its Avatar and its seal - the madness and the horror of blood. There were sharp pains, and sudden dizziness, and then profuse bleeding at the pores, with dissolution. The scarlet stains upon the body and especially upon the face of the victim, were the pest ban which shut him out from the aid and from the sympathy of his fellow-men. And the whole seizure, progress, and termination of the disease, were incidents of half an hour.

But Prince Prospero was happy and dauntless and sagacious. When his dominions were half depopulated, he summoned to his presence a thousand hale and light-hearted friends from among the knights and dames of his court, and with these retired to the deep seclusion of one of his crenellated abbeys. This was an extensive and magnificent structure, the creation of the prince's own eccentric yet august taste. A strong and lofty wall girdled it in. This wall had gates of iron. The courtiers, having entered, brought furnaces and massy hammers and welded the bolts.

They resolved to leave means neither of ingress nor egress to the sudden impulses of despair or of frenzy from within. The abbey was amply provisioned. With such precautions the courtiers might bid defiance to contagion. The external world could take care of itself. In the meantime it was folly to grieve or to think. The prince had provided all the appliances of pleasure. There were buffoons, there were improvisatori, there were ballet-dancers, there were musicians, there was Beauty, there was wine. All these and security were within. Without was the 'Red Death.'

It was toward the close of the fifth or sixth month of his seclusion that the Prince Prospero entertained his thousand friends at a masked ball of the most unusual magnificence.

But these other apartments were densely crowded, and in them beat feverishly the heart of life. And the revel went whirlingly on, until at length there commenced the sounding of midnight upon the clock. And then the music ceased, as I have told; and the evolutions of the waltzers were quieted; and there was an uneasy cessation of all things as before. But now there were twelve strokes to be sounded by the bell of the clock; and thus it happened, perhaps that more of thought crept, with more of time into the meditations of the thoughtful among those who revelled. And thus too, it happened, that before the last echoes of the last chime had utterly sunk into silence, there were many individuals in the crowd who had found leisure to become aware of the presence of a masked figure which had arrested the attention of no single individual before. And the rumour of this new presence having spread itself whisperingly around, there arose at length from the whole company a buzz, or murmur, of horror, and of disgust.
In an assembly of phantasms such as I have painted, it may well be supposed that no ordinary appearance could have excited such sensation. In truth the masquerade license of the night was nearly unlimited; but the figure in question had out-Heroded Herod, and gone beyond the bounds of even the prince's indefinite decorum. There are chords in the hearts of the most reckless which cannot be touched without emotion. Even with the utterly lost, to whom life and death are equally jests, there are matters of which no jest can be made. The whole company, indeed, seemed now deeply to feel that in the costume and bearing of the stranger neither wit nor propriety existed. The figure was tall and gaunt, and shrouded from head to foot in the habiliments of the grave. The mask which concealed the visage was made so nearly to resemble the countenance of a stiffened corpse that the closest scrutiny must have difficulty in detecting the cheat. And yet all this might have been endured, if not approved, by the mad revellers around. But the mummer had gone so far as to assume the type of the Red Death. His vesture was dabbled in blood - and his broad brow, with all the features of his face, was besprinkled with the scarlet horror.

When the eyes of Prince Prospero fell on this spectral image (which, with a slow and solemn movement, as if more fully to sustain its role, stalked to and fro among the waltzers) he was seen to be convulsed, in the first moment with a strong shudder either of terror or distaste; but in the next, his brow reddened with rage.

"Who dares" - he demanded hoarsely of the courtiers who stood near him - "who dares insult us with this blasphemous mockery? Seize him and unmask him - that we may know whom we have to hang, at sunrise, from the battlements!"

It was in the eastern or blue chamber in which stood Prince Prospero as he uttered these words. They rang throughout the seven rooms loudly and clearly, for the prince was a bold and robust man, and the music had become hushed at the waving of his hand.
It was in the blue room where stood the prince, with a group of pale courtiers by his side. At first, as he spoke, there was a slight rushing movement of this group in the direction of the intruder, who, at the moment was also near at hand, and now, with deliberate and stately step, made closer approach to the speaker. But from a certain nameless awe with which the mad assumptions of the mummer had inspired the whole party, there were found none who put forth a hand to seize him; so that, unimpeded, he passed within a yard of the prince's person; and while the vast assembly, as with one impulse, shrank from the centres of the rooms to the walls, he made his way uninterruptedly, but with the same solemn and measured step which had distinguished him from the first, through the blue chamber to the purple - to the purple to the green - through the green to the orange - through this again to the white - and even thence to the violet, ere a decided movement had been made to arrest him. It was then, however, that the Prince Prospero, maddened with rage and the shame of his own momentary cowardice, rushed hurriedly through the six chambers, while none followed him on account of a deadly terror that had seized upon all. He bore aloft a drawn dagger, and had approached, in rapid impetuosity, to within three or four feet of the retreating figure, when the latter, having attained the extremity of the velvet apartment, turned suddenly and confronted his pursuer. There was a sharp cry - and the dagger dropped gleaming upon the sable carpet, upon which most instantly afterward, fell prostrate in death the Prince Prospero. Then summoning the wild courage of despair, a throng of the revellers at once threw themselves into the black apartment, and seizing the mummer whose tall figure stood erect and motionless within the shadow of the ebony clock, gasped in unutterable horror at finding the grave-cerements and corpse-like mask, which they handled with so violent a rudeness, untenanted by any tangible form.

And now was acknowledged the presence of the Red Death. He had come like a thief in the night. And one by one dropped the revellers in the blood-bedewed halls of their revel, and died each in the despairing posture of his fall. And the life of the ebony clock went out with that of the last of the gay. And the flames of the tripods expired. And Darkness and Decay and the Red Death held illimitable dominion over all.