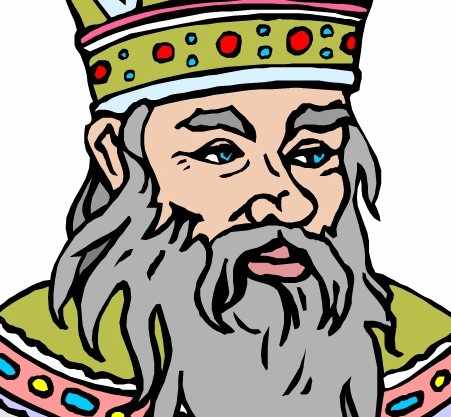 The next was too tall: 'What a maypole!' she said.

The next was too short: 'What a dumpling!' she said.

The fourth was too pale, and she called him 'Wallface.'

The fifth was too red, so she called him 'Coxcomb.'

The sixth was not straight enough; so she said he was like a green stick that had been laid to dry over a baker's oven. She had some joke to crack about every one. But she laughed most of all at a good king who was there.

'Look at him,' she said; 'his beard is like an old mop; he shall be called Grisly-beard.' So the king got the nickname of Grisly-beard.

But the old king was very angry when he saw how his daughter behaved and how badly she treated all his guests. He vowed that, willing or unwilling, she would marry the first man that came to the door.

Two days later a travelling fiddler came by the castle. He began to play under the window and begged for money and when the king heard him, he said, 'Let him come in.'

So, they brought the dirty-looking fellow in and, when he had sung before the king and the princess, he begged for a gift.

The king said, 'You have sung so well that I will give you my daughter to take as your wife.'

The princess begged and prayed; but the king said, 'I have sworn to give you to the first man who came to the door, and I will keep my word.'

Words and tears were to no avail; the parson was sent for, and she was married to the fiddler.

When this was over, the king said, 'Now get ready to leave -- you must not stay here -- you must travel with your husband.'

So the fiddler left the castle, and took the princess with him.

Soon they came to a great wood.

'It belongs to King Grisly-beard,' he answered; 'hadst thou taken him, all would have been thine.'

'Ah! unlucky wretch that I am!' she sighed; 'would that I had married King Grisly-beard!'

Next they came to some fine meadows.

'Whose are these beautiful green meadows?' she said.

'They belong to King Grisly-beard, hadst thou taken him, they would all have been thine.'

'Ah! unlucky wretch that I am!' she said; 'would that I had married King Grisly-beard!'

Then they came to a great city. 'Whose is this noble city?' she said.

'It belongs to King Grisly-beard; hadst thou taken him, it would all have been thine.'

'Ah! wretch that I am!' she sighed; 'why did I not marry King Grisly-beard?'

'That is no business of mine,' said the fiddler, 'why should you wish for another husband? Am I not good enough for you?'

At last they came to a small cottage. 'What a paltry place!' she said; 'to whom does that little dirty hole belong?'

The fiddler said, 'That is your and my house, where we are to live.'

'Where are your servants?' she cried.

'What do we want with servants?' he said; 'you must do for yourself whatever is to be done. Now make the fire, and put on water and cook my supper, for I am very tired.'

But the princess knew nothing of making fires and cooking, and the fiddler was forced to help her.

When they had eaten a very scanty meal they went to bed; but the fiddler called her up very early in the morning to clean the house.

They lived like that for two days and when they had eaten up all there was in the cottage, the man said, 'Wife, we can't go on thus, spending money and earning nothing. You must learn to weave baskets.'

Then the fiddler went out and cut willows, and brought them home, and she began to weave; but it made her fingers very sore.

'I see this work won't do,' he said, 'try and spin; perhaps you will do that better.'

So she sat down and tried to spin; but the threads cut her tender fingers until the blood ran.

'See now,' said the fiddler, 'you are good for nothing; you can do no work. What a bargain I have got! However, I'll try and set up a trade in pots and pans, and you shall stand in the market and sell them.'

'Alas!' she sighed, 'if any of my father's court should pass by and see me standing in the market, how they will laugh at me!'

But her husband did not care about that, and said she would have to work if she did not want to die of hunger.

At first the trade went well because many people, seeing such a beautiful woman, went to buy her wares and paid their money without even thinking of taking away the goods. They lived on this as long as it lasted and then her husband bought a fresh lot of pots and pans, and she sat herself down with it in the corner of the market.

However, soon a drunken soldier soon came by and rode his horse against her stall and broke all her goods into a thousand pieces.

She began to cry, and did not know what to do. 'Ah! what will become of me?' she said; 'what will my husband say?' So she ran home and told him everything.

'Who would have thought you would have been so silly,' he said, 'as to put an earthenware stall in the corner of the market, where everybody passes? But let us have no more crying; I see you are not fit for this sort of work, so I have been to the king's palace, and asked if they did not want a kitchen-maid; and they say they will take you, and there you will have plenty to eat.'

So the princess became a kitchen-maid and helped the cook to do all the dirtiest work. She was allowed to carry home some of the meat that was left over, and they lived on that.

She had not been there long before she heard that the king's eldest son was passing by, on his way to get married. She went to one of the windows and looked out. Everything was ready and all the pomp and brightness of the court was there. Seeing it, she grieved bitterly for the pride and folly that had brought her so low. The servants gave her some of the rich meats and she put them into her basket to take home.

All of a sudden, as she was leaving, in came the king's son in his golden clothes. When he saw such a beautiful woman at the door, he took her by the hand and said she should be his partner in the dance. She trembled with fear because she saw that it was King Grisly-beard, who was making fun of her. However, he kept hold of her, and led her into the hall. As she entered, the cover of the basket came off, and the meats in it fell out. Everybody laughed and jeered at her and she was so ashamed that she wished she were a thousand feet deep in the earth. She sprang over to the door so that she could run away but on the steps King Grisly-beard overtook her, brought her back and said:

'Fear me not! I am the fiddler who has lived with you in the hut. I brought you there because I truly loved you. I am also the soldier that overset your stall. I have done all this only to cure you of your silly pride, and to show you the folly of your ill-treatment of me. Now it is all over: you have learnt wisdom, and it is time to hold our marriage feast.'

Then the chamberlains came and brought her the most beautiful robes. Her father and his whole court were already there, and they welcomed her home. Joy was in every face and every heart. The feast was grand; they danced and sang; everyone was merry; and I only wish that you and I had been there.