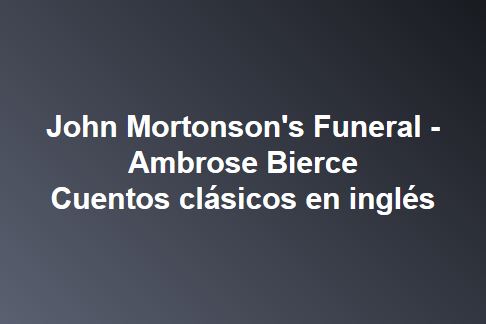 John Mortonson was dead: his lines in 'the tragedy "Man"' had all been spoken and he had left the stage.

The body rested in a fine mahogany coffin fitted with a plate of glass. All arrangements for the funeral had been so well attended to that had the deceased known he would doubtless have approved. The face, as it showed under the glass, was not disagreeable to look upon: it bore a faint smile, and as the death had been painless, had not been distorted beyond the repairing power of the undertaker. At two o'clock of the afternoon the friends were to assemble to pay their last tribute of respect to one who had no further need of friends and respect. The surviving members of the family came severally every few minutes to the casket and wept above the placid features beneath the glass. This did them no good; it did no good to John Mortonson; but in the presence of death reason and philosophy are silent.

As the hour of two approached the friends began to arrive and after offering such consolation to the stricken relatives as the proprieties of the occasion required, solemnly seated themselves about the room with an augmented consciousness of their importance in the scheme funereal. Then the minister came, and in that overshadowing presence the lesser lights went into eclipse. His entrance was followed by that of the widow, whose lamentations filled the room. She approached the casket and after leaning her face against the cold glass for a moment was gently led to a seat near her daughter. Mournfully and low the man of God began his eulogy of the dead, and his doleful voice, mingled with the sobbing which it was its purpose to stimulate and sustain, rose and fell, seemed to come and go, like the sound of a sullen sea. The gloomy day grew darker as he spoke; a curtain of cloud underspread the sky and a few drops of rain fell audibly. It seemed as if all nature were weeping for John Mortonson.

When the minister had finished his eulogy with prayer a hymn was sung and the pall-bearers took their places beside the bier. As the last notes of the hymn died away the widow ran to the coffin, cast herself upon it and sobbed hysterically. Gradually, however, she yielded to dissuasion, becoming more composed; and as the minister was in the act of leading her away her eyes sought the face of the dead beneath the glass. She threw up her arms and with a shriek fell backward insensible.
The mourners sprang forward to the coffin, the friends followed, and as the clock on the mantel solemnly struck three all were staring down upon the face of John Mortonson, deceased.

They turned away, sick and faint. One man, trying in his terror to escape the awful sight, stumbled against the coffin so heavily as to knock away one of its frail supports. The coffin fell to the floor, the glass was shattered to bits by the concussion.

From the opening crawled John Mortonson's cat, which lazily leapt to the floor, sat up, tranquilly wiped its crimson muzzle with a forepaw, then walked with dignity from the room.