An Inhabitant Of Carcosa - Ambrose Bierce 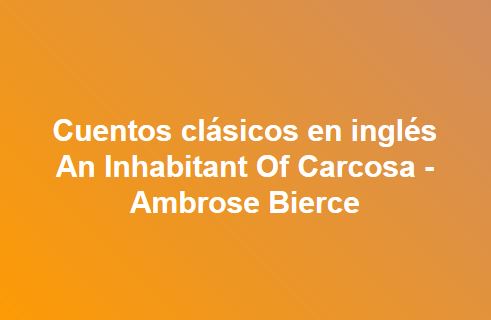 An Inhabitant Of Carcosa - Ambrose Bierce

For there be divers sorts of death -- some wherein the body remaineth; and in some it vanisheth quite away with the spirit. This commonly occurreth only in solitude (such is God's will) and, none seeing the end, we say the man is lost, or gone on a long journey -- which indeed he hath; but sometimes it hath happened in sight of many, as abundant testimony showeth. In one kind of death the spirit also dieth, and this it hath been known to do while yet the body was in vigour for many years. Sometimes, as is veritably attested, it dieth with the body, but after a season is raised up again in that place where the body did decay.

Pondering these words of Hali (whom God rest) and questioning their full meaning, as one who, having an intimation, yet doubts if there be not something behind, other than that which he has discerned, I noted not whither I had strayed until a sudden chill wind striking my face revived in me a sense of my surroundings. I observed with astonishment that everything seemed unfamiliar. On every side of me stretched a bleak and desolate expanse of plain, covered with a tall overgrowth of sere grass, which rustled and whistled in the autumn wind with Heaven knows what mysterious and disquieting suggestion. Protruded at long intervals above it, stood strangely shaped and sombrecoloured rocks, which seemed to have an understanding with one another and to exchange looks of uncomfortable significance, as if they had reared their heads to watch the issue of some foreseen event. A few blasted trees here and there appeared as leaders in this malevolent conspiracy of silent expectation.

The day, I thought, must be far advanced, though the sun was invisible; and although sensible that the air was raw and chill my consciousness of that fact was rather mental than physical -- I had no feeling of discomfort. Over all the dismal landscape a canopy of low, lead-coloured clouds hung like a visible curse. In all this there was a menace and a portent -- a hint of evil, an intimation of doom. Bird, beast, or insect there was none. The wind sighed in the bare branches of the dead trees and the grey grass bent to whisper its dread secret to the earth; but no other sound nor motion broke the awful repose of that dismal place.
I observed in the herbage a number of weatherworn stones, evidently shaped with tools. They were broken, covered with moss and half sunken in the earth. Some lay prostrate, some leaned at various angles, none was vertical. They were obviously headstones of graves, though the graves themselves no longer existed as either mounds or depressions; the years had levelled all. Scattered here and there, more massive blocks showed where some pompous tomb or ambitious monument had once flung its feeble defiance at oblivion. So old seemed these relics, these vestiges of vanity and memorials of affection and piety, so battered and worn and stained -- so neglected, deserted, forgotten the place, that I could not help thinking myself the discoverer of the burial-ground of a prehistoric race of men whose very name was long extinct.

Filled with these reflections, I was for some time heedless of the sequence of my own experiences, but soon I thought, 'How came I hither?' A moment's reflection seemed to make this all clear and explain at the same time, though in a disquieting way, the singular character with which my fancy had invested all that I saw or heard. I was ill. I remembered now that I had been prostrated by a sudden fever, and that my family had told me that in my periods of delirium I had constantly cried out for liberty and air, and had been held in bed to prevent my escape out-of-doors. Now I had eluded the vigilance of my attendants and had wandered hither to -- to where? I could not conjecture. Clearly I was at a considerable distance from the city where I dwelt -- the ancient and famous city of Carcosa.

No signs of human life were anywhere visible nor audible; no rising smoke, no watch-dog's bark, no lowing of cattle, no shouts of children at play-nothing but that dismal burial-place, with its air of mystery and dread, due to my own disordered brain. Was I not becoming again delirious, there beyond human aid? Was it not indeed all an illusion of my madness? I called aloud the names of my wives and sons, reached out my hands in search of theirs, even as I walked among the crumbling stones and in the withered grass.
A noise behind me caused me to turn about. A wild animal -- a lynx -- was approaching. The thought came to me: if I break down here in the desert -- if the fever return and I fail, this beast will be at my throat. I sprang toward it, shouting. It trotted tranquilly by within a hand's-breadth of me and disappeared behind a rock.

A moment later a man's head appeared to rise out of the ground a short distance away. He was ascending the farther slope of a low hill whose crest was hardly to be distinguished from the general level. His whole figure soon came into view against the background of grey cloud. He was half naked, half clad in skins. His hair was unkempt, his beard long and ragged. In one hand he carried a bow and arrow; the other held a blazing torch with a long trail of black smoke. He walked slowly and with caution, as if he feared falling into some open grave concealed by the tall grass. This strange apparition surprised but did not alarm, and taking such a course as to intercept him I met him almost face to face, accosting him with the familiar salutation, 'God keep you.'

He gave no heed, nor did he arrest his pace.

'Good stranger,' I continued, 'I am ill and lost. Direct me, I beseech you, to Carcosa.'

The man broke into a barbarous chant in an unknown tongue, passing on and away.

An owl on the branch of a decayed tree hooted dismally and was answered by another in the distance. Looking upward, I saw through a sudden rift in the clouds Aldebaran and the Hyades! In all this there was a hint of night -- the lynx, the man with the torch, the owl. Yet I saw -- I saw even the stars in absence of the darkness. I saw, but was apparently not seen nor heard. Under what awful spell did I exist?

I seated myself at the root of a great tree, seriously to consider what it were best to do. That I was mad I could no longer doubt, yet recognized a ground of doubt in the conviction. Of fever I had no trace. I had, withal, a sense of exhilaration and vigour altogether unknown to me -- a feeling of mental and physical exaltation. My senses seemed all alert; I could feel the air as a ponderous substance; I could hear the silence.
A great root of the giant tree against whose trunk I leaned as I sat held enclosed in its grasp a slab of stone, a part of which protruded into a recess formed by another root. The stone was thus partly protected from the weather, though greatly decomposed. Its edges were worn round, its corners eaten away, its surface deeply furrowed and scaled. Glittering particles of mica were visible in the earth about it-vestiges of its decomposition. This stone had apparently marked the grave out of which the tree had sprung ages ago. The tree's exacting roots had robbed the grave and made the stone a prisoner.

A sudden wind pushed some dry leaves and twigs from the uppermost face of the stone; I saw the lowrelief letters of an inscription and bent to read it. God in heaven! my name in full! -- the date of my birth! -- the date of my death!

A level shaft of light illuminated the whole side of the tree as I sprang to my feet in terror. The sun was rising in the rosy east. I stood between the tree and his broad red disk -- no shadow darkened the trunk!

A chorus of howling wolves saluted the dawn. I saw them sitting on their haunches, singly and in groups, on the summits of irregular mounds and tumuli filling a half of my desert prospect and extending to the horizon. And then I knew that these were ruins of the ancient and famous city of Carcosa.

Such are the facts imparted to the medium Bayrolles by the spirit Hoseib Alar Robardin.