How to celebrate your first Thanksgiving in the USA? 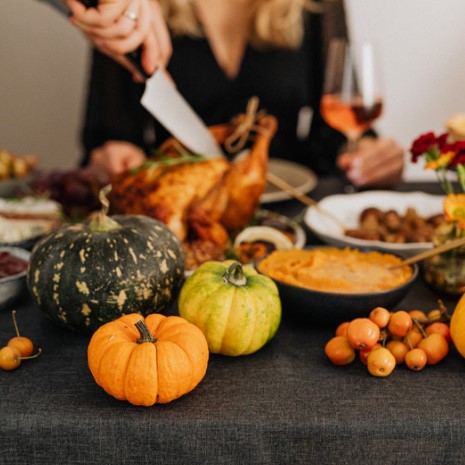 Thanksgiving is arguably the most celebrated day in the United States and perhaps the most important dinner of the year. But for anyone studying or in the United States on the fourth Thursday in November it can be a completely foreign holiday. Here are the things you need to know before you sit down to dinner.

What are we celebrating?

Thanksgiving is a holiday that celebrates close family and friends and the autumn harvest. At the heart of this holiday is a deep sense of gratitude. As the name implies, it is a day for "giving thanks".

The history of Thanksgiving

In the absence of any historical consensus on the exact location or date of the first Thanksgiving meal on American soil, the celebration of the holiday is most often considered to have taken place in 1621, in what is now Plymouth, Massachusetts.

The story goes that after the Mayflower arrived at Plymouth Rock on 11 December 1620, the Pilgrims (British separatists) lost 46 of their 102 settlers. However, with the help of the Wampanoag Indians, they learned to farm their land and survive the cold of their first winter in the New World. The summer of 1621 produced a bountiful harvest. To celebrate the event, a traditional English (or more likely Native American) three-day harvest festival was held to commemorate this magnanimous event.

What's on the menu for Thanksgiving dinner?

For most non-vegetarian families, turkey is a big part of the Thanksgiving feast. Whether roasted, smoked, brined or fried, achieving the perfect blend of crispy skin on the outside and tender meat on the inside is an art. ⇒ Recipe for making thanksgiving turkey

Before you even put the turkey in the oven, you'll need to stuff it with cornbread, onions, celery and dried cranberries. After a few hours of cooking inside the turkey, this sweet-tasting "stuffing" will become deliciously tender and juicy.

Cranberry sauce, with its sweet and sour undertones, brings out the salty, juicy flavour of the turkey, much like an Indian condiment.

From gravy to gravy

Once you've removed the turkey from the oven, it's time for gravy. Made from the leftover gravy at the bottom of a pan, this thick turkey gravy can generously accompany almost any dish at Thanksgiving dinner.

What other dish could go with this gravy? Topped with a juicy gravy, Sweet potato puree are perhaps the most delicious (and hearty) dish on the Thanksgiving dinner menu.

homemade pumpkin pie is the ultimate Thanksgiving dessert. However, after a second or even third plate of turkey and potatoes, it is perhaps the most difficult dish to finish. But don't panic! If you don't finish your share at dinner on Thursday, you can still enjoy it at breakfast the next morning.

How is Thanksgiving celebrated?

Now that you know a little more about the history of Thanksgiving, let's move forward a few centuries to look at modern Thanksgiving. Here's a Thanksgiving Day schedule:

Watch it live on TV or find a spot on the street from which to watch the helium balloons, floats and bands march through the streets of New York.

For employees, Thanksgiving, like most holidays in the United States, is either a holiday or a half day of work. Luckily, supermarkets are usually open in the morning, so make sure you get there early enough to select all the ingredients you need to start cooking.

Yes, you read that right, since the middle of the 20th century, the President of the United States has made a practice of "pardoning" one or two Thanksgiving turkeys each year, allowing these birds to escape slaughter.

Thanksgiving Day football games are an integral part of the American holiday. It's a great opportunity to cheer on your favourite team and take your mind off things, even though you'll most likely skip lunch. After all, you'll be feeling pretty hungry when it's time for dinner.

Preparing the Thanksgiving meal can take hours or even days, depending on the complexity of the dishes and the number of guests. The turkey alone requires at least 20 minutes of cooking time per pound - the largest birds can spend up to five hours in the oven.

It's probably not surprising that an American holiday is all about eating, but it is legitimately surprising how much you can actually eat if you put your mind to it.