Is The Eternals the worst Marvel film? 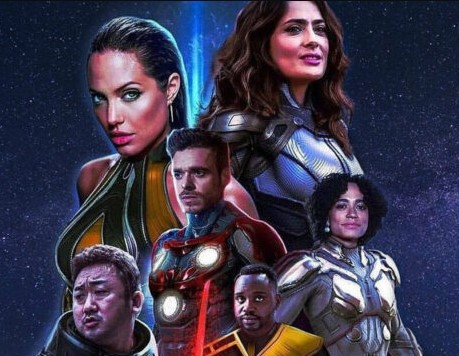 The new Marvel film already has a bad reputation, yet director Chloe Zhao has delivered a quality cosmic adventure.

The Eternals, the new Marvel superhero movie, is reportedly the "lowest rated feature film in the history of the Marvel Cinematic Universe". This is the little music that worries (or amuses) Avengers fans on the eve of the release of this feature film by Chloe Zhao. The American review aggregator Rotten Tomatoes ranks the film last behind the mediocre Thor: The Dark World with about 60% of positive reviews. The film is far from being considered a disaster (like Venom 2, which seems to be winning the hearts of the public) but the reviews seem... mixed. Worse, some people are disappointed because they were expecting a cinematic miracle from the director who won an Oscar last year for her Nomadland. A lack of enthusiasm from the critics which, coupled with audience fatigue, could cost Marvel dearly...

The Eternals had everything to please on paper. A very talented and appreciated director who voluntarily chose to work for Marvel without elitism. A five-star cast with Games of Thrones stars like Richard Madden and Kit Harington and Hollywood queens like Salma Hayek and Angelina Jolie. All of this with the MCU's "action-humour-emotion" formula that has been a hit in every film for over a decade. After seeing this film, we can see one thing: these ingredients are there, the recipe still works, Chloe Zhao's sense of aesthetics brings a singular identity and... we have a hard time understanding why some people are so harsh on these poor Eternals.

Is it the asserted diversity of the cast that displeases? Is it the weariness of seeing Marvel over and over again in the cinema and on television that wearies? Is The Eternals too long, too confusing, with too many characters? It is impossible for us to unravel the mysteries of this poor rating. Will The Eternals win the Oscar for Best Picture? Probably not. Is it the best Marvel? Not really. Is it the worst? Definitely not.

The Eternals is yet another Marvel origin story. Like Doctor Strange, Black Panther or Shang-Chi, Marvel introduces its audience to new heroes and their powers in an adventure that serves as a grand introduction. Unlike the other superheroes of the MCU, The Eternals are numerous. This is not a case of introducing one hero but a dozen. There is Sersi (Gemma Chan), Ikaris (Richard Madden), Kingo (Kumail Nanjiani),
Sprite (Lia McHugh), Phastos (Brian Tyree Henry), Makkari (Lauren Ridloff), Druig (Barry Keoghan), Gilgamesh (Don Lee), Ajak (Salma Hayek) and Thena (Angelina Jolie). Ten heroes from outer space who protect humans from the Deviants, evil creatures, and guide humanity in the shadows by overseeing its development.

Fans of mythology will see the links between certain illustrious characters and our heroes: Thena and Athena (the warrior), Phastos and Hephaestus (the blacksmith), Ikaris for Icarus (the man who flies too close to the sun), Sersi for Circe, the magician, etc. The script has fun with these references and offers each of these new heroes powers and personality . This spirit of discovery that plays on the audience's curiosity works wonderfully. We want to get to know them. It's simple and effective. The big criticism of this issue is that we would like to know more, to stay longer with each one.

While the heroine is clearly Sersi, her fellow Eternals each get a nice amount of exposure. Ikaris, her lover and the real Superman of the gang, questions his intentions. Kingo and his star ego bring a touch of Marvelian humour. Phastos and Makkari rely on humour, action and emotion but audiences will most likely remember them as the MCU's first gay (and father) and deaf superheroes. Druig and Sprite cast a disturbing shadow and a nice dose of humanity in these superior beings... The script is a puzzle. Each new little piece reveals the ambition of this Marvel that plays with cosmic forces never before seen in the MCU.

Marvel puts its new heroes in danger and not everyone will be back for The Eternals 2, that's what we can tell you. Like Game of Thrones, the writers didn't shy away from being cruel. Speaking of the sequel, be sure to stick around at the end of the credits to discover not one but two post-credits scenes.