Coulrophobia: All about the clown phobia 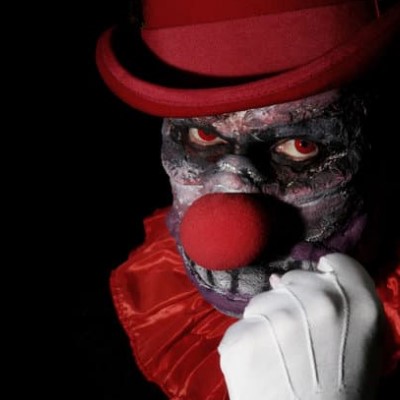 With his big red nose, his multicoloured make-up and his extravagant attire, the clown marks the spirits during childhood, by his comical side. However, he can also represent a frightening image for some people. Coulrophobia, or phobia of clowns, is nowadays widely reported in novels and films.

The word "coulrophobia" comes from the ancient Greek, coulro meaning acrobat on stilts, and phobia, fear. Coulrophobia thus refers to the unexplained fear of clowns. Classified as a specific phobia, this fear of clowns stems from a single source of anxiety related to the clown, and cannot be caused by another phobia.

Like any phobia, the subject may experience, in the presence of the object of fear

What causes the fear of clowns?

There are several reasons that can explain the phobia of clowns:

How to overcome coulrophobia?

As is often the case with phobias, the origin of the fear must be sought. This can be done using one of the following techniques:

Cognitive behavioural therapy (CBT) is available to help you overcome your fears. In this therapy, the patient and a therapist try to confront the object of his or her fear through practical exercises based on the patient's behaviour and reactions. In this way, one becomes familiar with the object of fear (the clown, the image of a circus, a masked birthday party, etc.), desensitising the fear.

NLP allows different approaches to treatment. Neuro-linguistic programming (NLP) will look at the way humans function in a given environment, based on their behavioural patterns. By using certain methods and tools, NLP will help the individual to change their perception of the world around them. This will change their initial behaviours and conditioning, by operating in the structure of their world view. In the case of a phobia, this method is particularly suitable.

EMDR, which stands for Eye Movement Desensitisation and Reprocessing, uses sensory stimulation through eye movements, but also through auditory or tactile stimuli.

This method allows the stimulation of a complex neuropsychological mechanism present in each of us. This stimulation allows us to reprocess moments experienced as traumatic and not digested by our brain, which can be at the origin of very disabling symptoms, such as phobias.

Hypnosis is finally an effective tool to find the origins of the phobia and thus seek solutions. The patient is dissociated from the phobia, in order to regain more flexibility in daily life. Ericksonian hypnosis can also be tried: a brief therapy, it can be used to treat anxiety disorders that escape psychotherapy.

Curing it in children... and adults

It is possible to start desensitising a fear at an early stage, especially in children, who have been made to feel insecure by clowns or masked people.

For them, the fear is mainly a lack of experience of the situation they are encountering: it is therefore a question of gently confronting situations experienced as stressful, without rushing or fleeing, by gradually desensitising the traumatic experience.

In some cases, the fear of clowns can be reduced without any particular treatment once the child has left. For others, who will keep this phobia into adulthood, they may choose a behavioural method to remedy it, and why not watch films about frightening clowns, in order to make the difference between "bad" fictional characters, and clowns encountered in the past or in everyday life, of the order of a funny and amusing character.