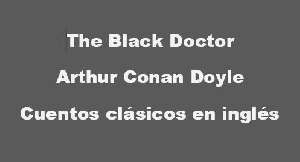 Bishop's Crossing is a small village lying ten miles in a south-westerly direction from Liverpool. Here in the early seventies there settled a doctor named Aloysius Lana. Nothing was known locally either of his antecedents or of the reasons which had prompted him to come to this Lancashire hamlet. Two facts only were certain about him; the one that he had gained his medical qualification with some distinction at Glasgow; the other that he came undoubtedly of a tropical race, and was so dark that he might almost have had a strain of the Indian in his composition. His predominant features were, however, European, and he possessed a stately courtesy and carriage which suggested a Spanish extraction. A swarthy skin, raven-black hair, and dark, sparkling eyes under a pair of heavily-tufted brows made a strange contrast to the flaxen or chestnut rustics of England, and the newcomer was soon known as "The Black Doctor of Bishop's Crossing." At first it was a term of ridicule and reproach; as the years went on it became a title of honour which was familiar to the whole countryside, and extended far beyond the narrow confines of the village.

"My dear fellow," said Sherlock Holmes, as we sat on either side of the fire in his lodgings at Baker Street, "life is infinitely stranger than anything which the mind of man can invent. We would not dare to conceive the things which are really mere commonplaces of existence. If we could fly out of that window hand in hand, hover over this great city, gently remove the roofs, and peep in at the queer things which are going on, the strange coincidences, the plannings, the cross-purposes, the wonderful chains of events, working through generations, and leading to the most outre results, it would make all fiction, with its conventionalities and foreseen conclusions, most stale and unprofitable." 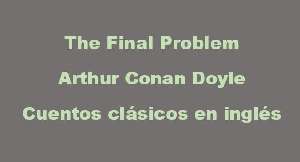 It is with a heavy heart that I take up my pen to write these the last words in which I shall ever record the singular gifts by which my friend Mr. Sherlock Holmes was distinguished. In an incoherent and, as I deeply feel, an entirely inadequate fashion, I have endeavored to give some account of my strange experiences in his company from the chance which first brought us together at the period of the "Study in Scarlet," up to the time of his interference in the matter of the "Naval Treaty" -- and interference which had the unquestionable effect of preventing a serious international complication. It was my intention to have stopped there, and to have said nothing of that event which has created a void in my life which the lapse of two years has done little to fill. My hand has been forced, however, by the recent letters in which Colonel James Moriarty defends the memory of his brother, and I have no choice but to lay the facts before the public exactly as they occurred. I alone know the absolute truth of the matter, and I am satisfied that the time has come when on good purpose is to be served by its suppression. As far as I know, there have been only three accounts in the public press: that in the Journal de Geneve on May 6th, 1891, the Reuter's despatch in the English papers on May 7th, and finally the recent letter to which I have alluded. Of these the first and second were extremely condensed, while the last is, as I shall now sow, an absolute perversion of the facts. It lies with me to tell for the first time what really took place between Professor Moriarty and Mr. Sherlock Holmes. 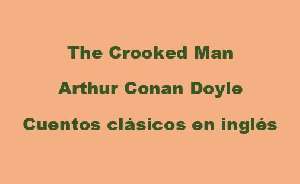 One summer night, a few months after my marriage, I was seated by my own hearth smoking a last pipe and nodding over a novel, for my day's work had been an exhausting one. My wife had already gone upstairs, and the sound of the locking of the hall door some time before told me that the servants had also retired. I had risen from my seat and was knocking out the ashes of my pipe when I suddenly heard the clang of the bell.

I looked at the clock. It was a quarter to twelve. This could not be a visitor at so late an hour. A patient, evidently, and possibly an all-night sitting. With a wry face I went out into the hall and opened the door. To my astonishment it was Sherlock Holmes who stood upon my step.

Aristide Valentin, Chief of the Paris Police, was late for his dinner, and some of his guests began to arrive before him. These were, however, reassured by his confidential servant, Ivan, the old man with a scar, and a face almost as grey as his moustaches, who always sat at a table in the entrance hall—a hall hung with weapons. Valentin's house was perhaps as peculiar and celebrated as its master. It was an old house, with high walls and tall poplars almost overhanging the Seine; but the oddity—and perhaps the police value—of its architecture was this: that there was no ultimate exit at all except through this front door, which was guarded by Ivan and the armoury. The garden was large and elaborate, and there were many exits from the house into the garden. But there was no exit from the garden into the world outside; all round it ran a tall, smooth, unscalable wall with special spikes at the top; no bad garden, perhaps, for a man to reflect in whom some hundred criminals had sworn to kill. 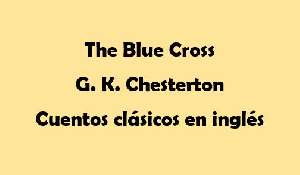 Between the silver ribbon of morning and the green glittering ribbon of sea, the boat touched Harwich and let loose a swarm of folk like flies, among whom the man we must follow was by no means conspicuous—nor wished to be. There was nothing notable about him, except a slight contrast between the holiday gaiety of his clothes and the official gravity of his face. His clothes included a slight, pale grey jacket, a white waistcoat, and a silver straw hat with a grey-blue ribbon. His lean face was dark by contrast, and ended in a curt black beard that looked Spanish and suggested an Elizabethan ruff. He was smoking a cigarette with the seriousness of an idler. There was nothing about him to indicate the fact that the grey jacket covered a loaded revolver, that the white waistcoat covered a police card, or that the straw hat covered one of the most powerful intellects in Europe. For this was Valentin himself, the head of the Paris police and the most famous investigator of the world; and he was coming from Brussels to London to make the greatest arrest of the century. 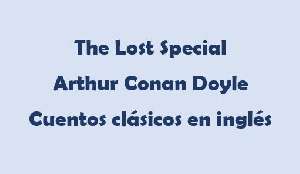 The confession of Herbert de Lernac, now lying under sentence of death at Marseilles, has thrown a light upon one of the most inexplicable crimes of the century - an incident which is, I believe, absolutely unprecedented in the criminal annals of any country. Although there is a reluctance to discuss the matter in official circles, and little information has been given to the Press, there are still indications that the statement of this arch-criminal is corroborated by the facts, and that we have at last found a solution for a most astounding business. As the matter is eight years old, and as its importance was somewhat obscured by a political crisis which was engaging the public attention at the time, it may be as well to state the facts as far as we have been able to ascertain them. They are collated from the Liverpool papers of that date, from the proceedings at the inquest upon John Slater, the engine-driver, and from the records of the London and West Coast Railway Company, which have been courteously put at my disposal. Briefly, they are as follows: 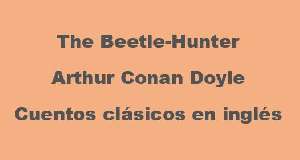 A curious experience? said the Doctor. Yes, my friends, I have had one very curious experience. I never expect to have another, for it is against all doctrines of chances that two such events would befall any one man in a single lifetime. You may believe me or not, but the thing happened exactly as I tell it.

I had just become a medical man, but I had not started in practice, and I lived in rooms in Gower Street. The street has been renumbered since then, but it was in the only house which has a bow-window, upon the left-hand side as you go down from the Metropolitan Station. A widow named Murchison kept the house at that time, and she had three medical students and one engineer as lodgers. I occupied the top room, which was the cheapest, but cheap as it was it was more than I could afford. My small resources were dwindling away, and every week it became more necessary that I should find something to do. Yet I was very unwilling to go into general practice, for my tastes were all in the direction of science, and especially of zoology, towards which I had always a strong leaning. I had almost given the fight up and resigned myself to being a medical drudge for life, when the turning-point of my struggles came in a very extraordinary way. 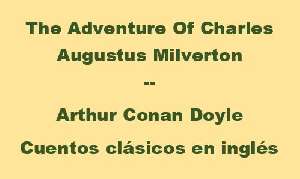 It is years since the incidents of which I speak took place, and yet it is with diffidence that I allude to them. For a long time, even with the utmost discretion and reticence, it would have been impossible to make the facts public, but now the principal person concerned is beyond the reach of human law, and with due suppression the story may be told in such fashion as to injure no one. It records an absolutely unique experience in the career both of Mr. Sherlock Holmes and of myself. The reader will excuse me if I conceal the date or any other fact by which he might trace the actual occurrence.

The Man with the Watches - Arthur Conan Doyle 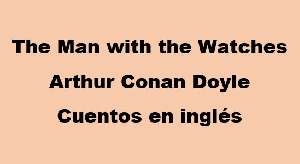 The Man with the Watches - Arthur Conan Doyle

There are many who will still bear in mind the singular circumstances which, under the heading of the Rugby Mystery, filled many columns of the daily Press in the spring of the year 1892. Coming as it did at a period of exceptional dullness, it attracted perhaps rather more attention than it deserved, but it offered to the public that mixture of the whimsical and the tragic which is most stimulating to the popular imagination. Interest drooped, however, when, after weeks of fruitless investigation, it was found that no final explanation of the facts was forthcoming, and the tragedy seemed from that time to the present to have finally taken its place in the dark catalogue of inexplicable and unexpiated crimes. A recent communication (the authenticity of which appears to be above question) has, however, thrown some new and clear light upon the matter. Before laying it before the public it would be as well, perhaps, that I should refresh their memories as to the singular facts upon which this commentary is founded. These facts were briefly as follows:

Leer más: The Man with the Watches - Arthur Conan Doyle