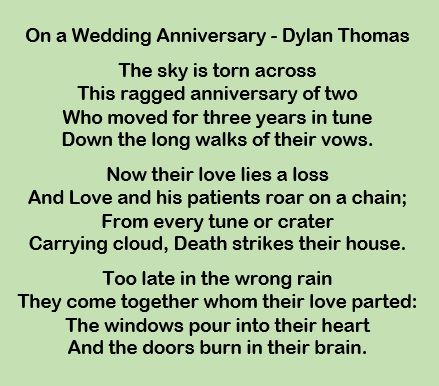 Do Not Go Gentle Into That Good Night - Dylan Thomas

Good men, the last wave by, crying how bright
Their frail deeds might have danced in a green bay,
Rage, rage against the dying of the light.

Wild men who caught and sang the sun in flight,
And learn, too late, they grieved it on its way,
Do not go gentle into that good night.

Grave men, near death, who see with blinding sight
Blind eyes could blaze like meteors and be gay,
Rage, rage against the dying of the light.

And you, my father, there on the sad height,
Curse, bless me now with your fierce tears, I pray.
Do not go gentle into that good night.
Rage, rage against the dying of the light.

Love in the Asylum - Dylan Thomas

A stranger has come
To share my room in the house not right in the head,
A girl mad as birds

Bolting the night of the door with her arm her plume.
Strait in the mazed bed
She deludes the heaven-proof house with entering clouds

Yet she deludes with walking the nightmarish room,
At large as the dead,
Or rides the imagined oceans of the male wards.

She has come possessed
Who admits the delusive light through the bouncing wall,
Possessed by the skies

She sleeps in the narrow trough yet she walks the dust
Yet raves at her will
On the madhouse boards worn thin by my walking tears.

And taken by light in her arms at long and dear last
I may without fail
Suffer the first vision that set fire to the stars.

The Hand that Signed the Paper Felled a City - Dylan Thomas

The hand that signed the paper felled a city;
Five sovereign fingers taxed the breath,
Doubled the globe of dead and halved a country;
These five kings did a king to death.

The mighty hand leads to a sloping shoulder,
The finger joints are cramped with chalk;
A goose's quill has put an end to murder
That put an end to talk.

The hand that signed the treaty bred a fever,
And famine grew, and locusts came;
Great is the hand the holds dominion over
Man by a scribbled name.

The five kings count the dead but do not soften
The crusted wound nor pat the brow;
A hand rules pity as a hand rules heaven;
Hands have no tears to flow.

Should lanterns shine, the holy face,
Caught in an octagon of unaccustomed light,
Would wither up, and any boy of love
Look twice before he fell from grace.
The features in their private dark
Are formed of flesh, but let the false day come
And from her lips the faded pigments fall,
The mummy cloths expose an ancient breast.

I have heard may years of telling,
And many years should see some change.

The ball I threw while playing in the park
Has not yet reached the ground.

On a Wedding Anniversary - Dylan Thomas

The sky is torn across
This ragged anniversary of two
Who moved for three years in tune
Down the long walks of their vows.

Now their love lies a loss
And Love and his patients roar on a chain;
From every tune or crater
Carrying cloud, Death strikes their house.

Too late in the wrong rain
They come together whom their love parted:
The windows pour into their heart
And the doors burn in their brain.