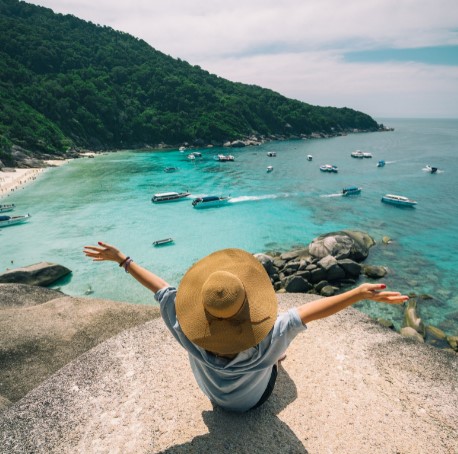 What is the summer solstice?

The Earth rotates every day around itself, but it also rotates around the Sun. A rotation that lasts for a year, but because the earth's axis of rotation is slightly tilted. This means that we are more or less far away from the sun. In summer, the tilt of the northern hemisphere towards the sun is at its maximum. These rays hit us more directly. Consequently, it gets hotter and our exposure is longer until the famous summer solstice, which is the day when the northern hemisphere is closest to the sun.

Recognising that the solstices and equinoxes symbolise the fertility of the earth, agricultural and food production systems, cultural heritage and its age-old traditions, the United Nations General Assembly recognised that the celebration of these events embodies the unity of cultural heritage and age-old traditions and also plays an important role in strengthening ties between peoples on the basis of mutual respect and respect for human rights, the ideals of peace and good neighbourliness. It therefore recognised 21 June as International Solstice Celebration Day by adopting resolution A/RES/73/300.

What are the symbols surrounding this day?

For centuries, this peak of the solar cycle has been accompanied by superstition. Farmers celebrate the beautiful season, the longer days that allow them to work the land longer and hope for a good harvest. They pay homage to the fertility of the earth and the power of the sun, bearer of warmth and light. A sun that architects have always played with, as at the prehistoric site of Stonehenge in England, where the sun rises in a stone arch on the day of the summer solstice.

A game that also exists with the pyramids of Egypt or with the basilica of Vézelay where a path of light is drawn on the building at this time of the year.

How is the summer solstice celebrated today?

Traditionally, it is the feast of Saint-Jean that welcomes the summer. Originally a pagan festival, it has been Christianised. It is celebrated on 24 June for the birth of John the Baptist, and is accompanied by large bonfires, symbols of the power of the sun, but also by rounds and dances. #SummerSolstice #Summer #Solstice.

International Day of the Sun

World Solar Day is celebrated on 21 June, coinciding with the onset of the summer solstice and the arrival of longer and brighter days.

The main objective of this day is to show the world's population the importance of the existence of this star at the centre of the solar system in our lives, as well as to promote the use of clean and non-polluting renewable energies.

Sun Day events and activities are celebrated all over the world, but especially in the northern hemisphere.

A star that shines brightly

The sun is the centre of our solar system. It is one of the many stars in our galaxy. At its centre there is intense activity: the temperature is 15 million degrees Celsius!

The distance from the Earth to the Sun is only 150 million kilometres. Its light takes only eight minutes to reach us, while the light from Sirius, the brightest star in our sky after the Sun, takes eight years.

The Sun is a huge gaseous sphere 1.4 million kilometres across. It was born about 4 billion years ago from the gravitational collapse of a cloud of hydrogen and helium. The Sun will continue to give us its light and warmth for a long time to come: between 4 and 5 billion years! So we still have plenty of time to enjoy its beneficial rays.

Humanity and the sun...

We all know that the earth revolves around the sun, but before Copernicus' discovery in the 16th century, men were convinced that the opposite was true. Long before it was rationally studied, the sun was the subject of many myths. Thus, for the ancient Greeks, the light of the sun was produced by the god Helios driving the solar chariot... The ancient Egyptians celebrated the sun in the form of the god Ra, the most important of all, as did the Aztecs, who also worshipped the sun. Today sun worship has disappeared, but people still celebrate the sun as an irreplaceable source of life.

Reasonable exposure to the sun has many positive effects on our health. Firstly, we feel an inimitable sense of well-being when the sun's gentle rays bring warmth and light to our bodies. This natural light is also a powerful anti-depressant, which explains why our mood is often better in summer. In addition, the sun's rays promote the production of vitamin D by our body. This same vitamin D will in turn allow the assimilation of calcium, which is so beneficial for our bones.

However, the benefits of the sun are also accompanied by well-known dangers. Indeed, the sun emits ultraviolet rays, UV rays, which cause painful sunburns, but are also responsible for premature skin ageing and, in the most serious cases, cancers. #InternationalSunDay #SunDay.