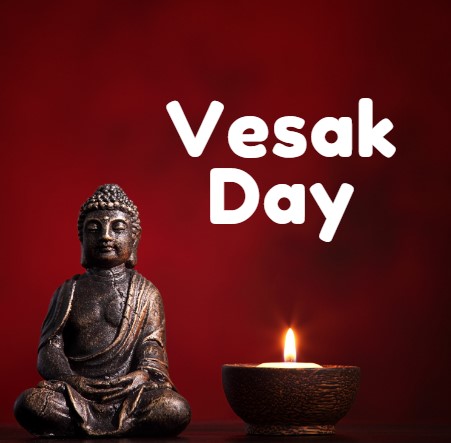 Vesak Day commemorates three important events in the life of Buddha: his birth, his spiritual awakening and his entry into Nirvana. The event, organised by the UN, is considered a major international religious and cultural festival.

Vesak comes from the name Vaisakha, which refers to the lunar month of the Hindu calendar that usually falls between April and May of the Gregorian calendar. According to an ancient belief from India, the birthplace of Buddhism, the full moon day of Vaisakha is considered the most sacred day of the year. It is the day on which Siddhartha Gautama, known as Shakyamuni and later Buddha, was born, in 623 BC. It is also the day he attained enlightenment (Buddhahood) in 598 BC and the day he passed away (parinirvana) at the age of 80 in 543 BC.

The UN General Assembly, in its resolution 54/115 of 1999, recognises Vesak Day as a sacred religious festival of international significance for peace. The United Nations salutes the contributions that Buddhism, one of the world's oldest religions, has made and continues to make to the spirituality of humanity. Vesak has been celebrated annually since 2001 at the UN headquarters in New York and at other UN offices around the world. It has become a major annual public celebration in countries such as Vietnam, Nepal, Singapore, Thailand, Cambodia, the Republic of Korea, Malaysia, Sri Lanka, Myanmar, Indonesia, Pakistan and India.

The choice of day varies from country to country. In Vietnam, China, Japan and the Republic of Korea, Vesak Day falls on the 8th day of the 4th lunar month and is an ideal opportunity to immerse oneself in the teachings of Buddha, his message of compassion, peace and goodwill and to honour human values.

The annual organisation of the Vesak "is a good UN policy to affirm and propagate the fundamental values of Buddhism in spiritual life", says Bùi Huu Duoc, head of the Department of Buddhism of the government's Religions Committee. Indeed, this event has become a cultural and solidarity festival in Vietnam, a country with a Buddhist tradition, both nationally and globally, conveying a message of peace and love from Buddhist thought, with the aim of deepening solidarity between countries and territories.

Bringing happiness to others

Celebrating Vesakha (Vesak) also means making special efforts to bring happiness to unfortunate people such as the elderly, the disabled and the sick. On this day, Buddhists will distribute gifts in cash and kind to various charities in the country. Vesākha is also a time of great joy and happiness, expressed not through the temptation of appetite but through concentration on useful activities such as decorating and lighting temples, painting and creating exquisite scenes of the Buddha's life for public display. Devout Buddhists also compete to provide refreshments and vegetarian food to devotees who visit the temple to pay homage to the Enlightened One.

Paying homage to the Buddha

Tradition attributes to the Buddha himself an instruction on how to pay homage. Just before he died, he saw his faithful servant Ananda crying. The Buddha advised him not to cry, but to understand the universal law that all compound things (including his own body) must disintegrate. He advised everyone not to weep over the disintegration of the physical body but to regard his teachings (the Dhamma) as their teacher from then on, for only the truth of the Dhamma is eternal and not subject to the law of change. He also emphasised that the way to pay homage to him was not simply by flowers, incense and lights, but by truly and sincerely trying to follow his teachings. This is how Buddhists are supposed to celebrate Vesak: by taking the opportunity to reiterate their determination to lead a noble life, to develop their mind, to show kindness and to bring peace and harmony to humanity.