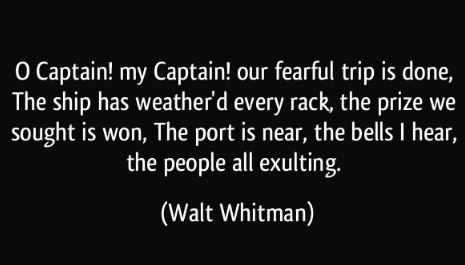 I Sit And Look Out - Walt Whitman

I SIT and look out upon all the sorrows of the world, and upon all
oppression and shame;
I hear secret convulsive sobs from young men, at anguish with
themselves, remorseful after deeds done;
I see, in low life, the mother misused by her children, dying,
neglected, gaunt, desperate;

I see the wife misused by her husband—I see the treacherous seducer
of young women;
I mark the ranklings of jealousy and unrequited love, attempted to be
hid—I see these sights on the earth;
I see the workings of battle, pestilence, tyranny—I see martyrs and
prisoners;
I observe a famine at sea—I observe the sailors casting lots who
shall be kill'd, to preserve the lives of the rest;
I observe the slights and degradations cast by arrogant persons upon
laborers, the poor, and upon negroes, and the like;
All these—All the meanness and agony without end, I sitting, look
out upon,
See, hear, and am silent.

Beat! beat! drums!—Blow! bugles! blow!
Through the windows—through the doors—burst like a force of armed men,
Into the solemn church, and scatter the congregation;
Into the school where the scholar is studying;
Leave not the bridegroom quiet—no happiness must he have now with his bride;
Nor the peaceful farmer any peace plowing his field or gathering his grain;
So fierce you whirr and pound, you drums—so shrill you bugles blow.

Beat! beat! drums! Blow! bugles! blow!
Over the traffic of cities—over the rumble of wheels in the streets;
Are beds prepared for sleepers at night in the houses? No sleepers must sleep in those beds;
No bargainers' bargains by day—no brokers or speculators. Would they continue?
Would the talkers be talking? would the singer attempt to sing?
Would the lawyer rise in the court to state his case before the judge?
Then rattle quicker, heavier drums—and bugles wilder blow.

Beat! beat! drums! Blow! bugles! blow!
Make no parley—stop for no expostulation;
Mind not the timid—mind not the weeper or prayer;
Mind not the old man beseeching the young man;
Let not the child's voice be heard, nor the mother's entreaties. Recruit! recruit!
Make the very trestles shake under the dead, where they lie in their shrouds awaiting the hearses.
So strong you thump, O terrible drums—so loud you bugles blow.

O Captain! my Captain! our fearful trip is done,
The ship has weather'd every rack, the prize we sought is won,
The port is near, the bells I hear, the people all exulting,
While follow eyes the steady keel, the vessel grim and daring;
But O heart! heart! heart!
O the bleeding drops of red,
Where on the deck my Captain lies,
Fallen cold and dead.

O Captain! my Captain! rise up and hear the bells;
Rise up--for you the flag is flung--for you the bugle trills,
For you bouquets and ribbon'd wreaths--for you the shores a-crowding,
For you they call, the swaying mass, their eager faces turning;
Here Captain! dear father!
This arm beneath your head!
It is some dream that on the deck,
You've fallen cold and dead.

My Captain does not answer, his lips are pale and still,
My father does not feel my arm, he has no pulse nor will,
The ship is anchor'd safe and sound, its voyage closed and done,
From fearful trip the victor ship comes in with object won;
Exult O shores, and ring O bells!
But I with mournful tread,
Walk the deck my Captain lies,
Fallen cold and dead.

I hear America singing, the varied carols I hear,
Those of mechanics, each one singing his as it should be blithe and strong,
The carpenter singing his as he measures his plank or beam,
The mason singing his as he makes ready for work, or leaves off work,
The boatman singing what belongs to him in his boat, the deckhand singing on the steamboat deck,
The shoemaker singing as he sits on his bench, the hatter singing as he stands,
The wood-cutter's song, the ploughboy's on his way in the morning, or at noon intermission or at sundown,
The delicious singing of the mother, or of the young wife at work, or of the girl sewing or washing,
Each singing what belongs to him or her and to none else,
The day what belongs to the day - at night the party of young fellows, robust, friendly,
Singing with open mouths their strong melodious songs.