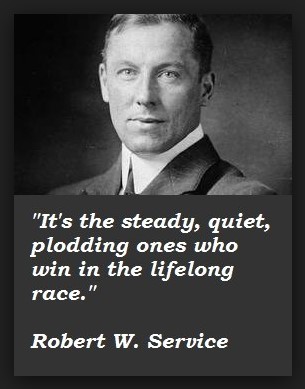 Three times I had the lust to kill,
To clutch a throat so young and fair,
And squeeze with all my might until
No breath of being lingered there.
Three times I drove the demon out,
Though on my brow was evil sweat. . . .
And yet I know beyond a doubt
He'll get me yet, he'll get me yet.

I know I'm mad, I ought to tell
The doctors, let them care for me,
Confine me in a padded cell
And never, never set me free;
But Oh how cruel that would be!
For I am young - and comely too . . .
Yet dim my demon I can see,
And there is but one thing to do.

Three times I beat the foul fiend back;
The fourth, I know he will prevail,
And so I'll seek the railway track
And lay my head upon the rail,
And sight the dark and distant train,
And hear its thunder louder roll,
Coming to crush my cursed brain . . .
Oh God, have mercy on my soul!

The Spell Of The Yukon - Robert W. Service

No! There’s the land. (Have you seen it?)
It’s the cussedest land that I know,
From the big, dizzy mountains that screen it
To the deep, deathlike valleys below.
Some say God was tired when He made it;
Some say it’s a fine land to shun;
Maybe; but there’s some as would trade it
For no land on earth—and I’m one.

You come to get rich (damned good reason);
You feel like an exile at first;
You hate it like hell for a season,
And then you are worse than the worst.
It grips you like some kinds of sinning;
It twists you from foe to a friend;
It seems it’s been since the beginning;
It seems it will be to the end.

I’ve stood in some mighty-mouthed hollow
That’s plumb-full of hush to the brim;
I’ve watched the big, husky sun wallow
In crimson and gold, and grow dim,
Till the moon set the pearly peaks gleaming,
And the stars tumbled out, neck and crop;
And I’ve thought that I surely was dreaming,
With the peace o’ the world piled on top.

The summer—no sweeter was ever;
The sunshiny woods all athrill;
The grayling aleap in the river,
The bighorn asleep on the hill.
The strong life that never knows harness;
The wilds where the caribou call;
The freshness, the freedom, the farness—
O God! how I’m stuck on it all.

The winter! the brightness that blinds you,
The white land locked tight as a drum,
The cold fear that follows and finds you,
The silence that bludgeons you dumb.
The snows that are older than history,
The woods where the weird shadows slant;
The stillness, the moonlight, the mystery,
I’ve bade ’em good-by—but I can’t.

There’s a land where the mountains are nameless,
And the rivers all run God knows where;
There are lives that are erring and aimless,
And deaths that just hang by a hair;
There are hardships that nobody reckons;
There are valleys unpeopled and still;
There’s a land—oh, it beckons and beckons,
And I want to go back—and I will.

They’re making my money diminish;
I’m sick of the taste of champagne.
Thank God! when I’m skinned to a finish
I’ll pike to the Yukon again.
I’ll fight—and you bet it’s no sham-fight;
It’s hell!—but I’ve been there before;
And it’s better than this by a damsite—
So me for the Yukon once more.

There’s gold, and it’s haunting and haunting;
It’s luring me on as of old;
Yet it isn’t the gold that I’m wanting
So much as just finding the gold.
It’s the great, big, broad land ’way up yonder,
It’s the forests where silence has lease;
It’s the beauty that thrills me with wonder,
It’s the stillness that fills me with peace.

There are strange things done in the midnight sun
By the men who moil for gold;
The Arctic trails have their secret tales
That would make your blood run cold;
The Northern Lights have seen queer sights,
But the queerest they ever did see
Was that night on the marge of Lake Lebarge
I cremated Sam McGee.

Now Sam McGee was from Tennessee, where the cotton blooms and blows.
Why he left his home in the South to roam 'round the Pole, God only knows.
He was always cold, but the land of gold seemed to hold him like a spell;
Though he'd often say in his homely way that he'd "sooner live in hell".

On a Christmas Day we were mushing our way over the Dawson trail.
Talk of your cold! through the parka's fold it stabbed like a driven nail.
If our eyes we'd close, then the lashes froze till sometimes we couldn't see;
It wasn't much fun, but the only one to whimper was Sam McGee.

And that very night, as we lay packed tight in our robes beneath the snow,
And the dogs were fed, and the stars o'erhead were dancing heel and toe,
He turned to me, and "Cap," says he, "I'll cash in this trip, I guess;
And if I do, I'm asking that you won't refuse my last request."

Well, he seemed so low that I couldn't say no; then he says with a sort of moan:
"It's the cursed cold, and it's got right hold till I'm chilled clean through to the bone.
Yet 'tain't being dead -- it's my awful dread of the icy grave that pains;
So I want you to swear that, foul or fair, you'll cremate my last remains."

A pal's last need is a thing to heed, so I swore I would not fail;
And we started on at the streak of dawn; but God! he looked ghastly pale.
He crouched on the sleigh, and he raved all day of his home in Tennessee;
And before nightfall a corpse was all that was left of Sam McGee.

There wasn't a breath in that land of death, and I hurried, horror-driven,
With a corpse half hid that I couldn't get rid, because of a promise given;
It was lashed to the sleigh, and it seemed to say:
"You may tax your brawn and brains,
But you promised true, and it's up to you to cremate those last remains."

Now a promise made is a debt unpaid, and the trail has its own stern code.
In the days to come, though my lips were dumb, in my heart how I cursed that load.
In the long, long night, by the lone firelight, while the huskies, round in a ring,
Howled out their woes to the homeless snows -- O God! how I loathed the thing.

And every day that quiet clay seemed to heavy and heavier grow;
And on I went, though the dogs were spent and the grub was getting low;
The trail was bad, and I felt half mad, but I swore I would not give in;
And I'd often sing to the hateful thing, and it hearkened with a grin.

Till I came to the marge of Lake Lebarge, and a derelict there lay;
It was jammed in the ice, but I saw in a trice it was called the "Alice May".
And I looked at it, and I thought a bit, and I looked at my frozen chum;
Then "Here," said I, with a sudden cry, "is my cre-ma-tor-eum."

Some planks I tore from the cabin floor, and I lit the boiler fire;
Some coal I found that was lying around, and I heaped the fuel higher;
The flames just soared, and the furnace roared -- such a blaze you seldom see;
And I burrowed a hole in the glowing coal, and I stuffed in Sam McGee.

Then I made a hike, for I didn't like to hear him sizzle so;
And the heavens scowled, and the huskies howled, and the wind began to blow.
It was icy cold, but the hot sweat rolled down my cheeks, and I don't know why;
And the greasy smoke in an inky cloak went streaking down the sky.

I do not know how long in the snow I wrestled with grisly fear;
But the stars came out and they danced about ere again I ventured near;
I was sick with dread, but I bravely said: "I'll just take a peep inside.
I guess he's cooked, and it's time I looked"; ... then the door I opened wide.

And there sat Sam, looking cool and calm, in the heart of the furnace roar;
And he wore a smile you could see a mile, and he said: "Please close that door.
It's fine in here, but I greatly fear you'll let in the cold and storm --
Since I left Plumtree, down in Tennessee, it's the first time I've been warm."

There are strange things done in the midnight sun
By the men who moil for gold;
The Arctic trails have their secret tales
That would make your blood run cold;
The Northern Lights have seen queer sights,
But the queerest they ever did see
Was that night on the marge of Lake Lebarge
I cremated Sam McGee.