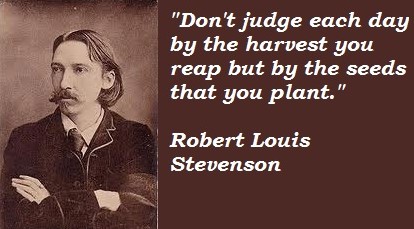 The moon has a face like the clock in the hall;
She shines on thieves on the garden wall,
On streets and fields and harbour quays,
And birdies asleep in the forks of the trees.

The squalling cat and the squeaking mouse,
The howling dog by the door of the house,
The bat that lies in bed at noon,
All love to be out by the light of the moon.

But all of the things that belong to the day
Cuddle to sleep to be out of her way;
And flowers and children close their eyes
Till up in the morning the sun shall arise.

Faster than fairies, faster than witches,
Bridges and houses, hedges and ditches;
And charging along like troops in a battle
All through the meadows the horses and cattle:
All of the sights of the hill and the plain
Fly as thick as driving rain;
And ever again, in the wink of an eye,
Painted stations whistle by.
Here is a child who clambers and scrambles,
All by himself and gathering brambles;
Here is a tramp who stands and gazes;
And here is the green for stringing the daisies!
Here is a cart runaway in the road
Lumping along with man and load;
And here is a mill, and there is a river:
Each a glimpse and gone forever!

I have a little shadow that goes in and out with me,
And what can be the use of him is more than I can see.
He is very, very like me from the heels up to the head;
And I see him jump before me, when I jump into my bed.
The funniest things about him is the way he likes to grow-
Not at all like proper children, which is always very slow;
For he sometimes shoots up taller like an India rubber ball,
And he sometimes gets so little that there's none of him at all.
He hasn't got a notion of how children ought to play,
And can only make a fool of me in every sort of way.
He stays so close beside me, he's a coward you can see;
I'd think shame to stick to nursie as that shadow sticks to me!
One morning, very early, before the sun was up,
I rose and found the shining dew on every buttercup;
But my lazy little shadow, like an arrant sleepy-head,
Had stayed at home behind me and was fast asleep in bed.

How do you like to go up in a swing,
Up in the air so blue?
Oh, I do think it the pleasantest thing
Ever a child can do!

Up in the air and over the wall,
Till I can see so wide,
River and trees and cattle and all
Over the countryside--