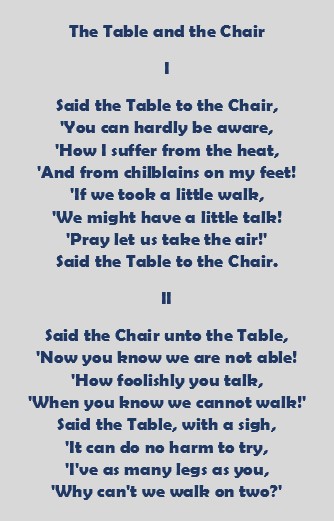 There was an Old Man with a beard,
Who said, 'It is just as I feared!
Two Owls and a Hen,
Four Larks and a Wren,
Have all built their nests in my beard!'

There was a Young Lady of Hull,
Who was chased by a virulent bull;
But she seized on a spade,
And called out, 'Who's afraid?'
Which distracted that virulent bull.

There was an Old Man who said, 'Hush!
I perceive a young bird in this bush!'
When they said, 'Is it small?'
He replied, 'Not at all!
It is four times as big as the bush!'

There was a Young Lady of Russia,
Who screamed so that no one could hush her;
Her screams were extreme,
No one heard such a scream,
As was screamed by that lady of Russia.

There was an old man in a tree,
Whose whiskers were lovely to see;
But the birds of the air,
Pluck'd them perfectly bare,
To make themselves nests on that tree.

There is a Young Lady whose nose
Continually prospers and grows;
When it grew out of sight,
she exclaimed in a fright,
"Oh! Farewell to the end of my nose!"

There was an Old Person of Dover,
Who rushed through a field of blue Clover;
But some very large bees,
Stung his nose and his knees,
So he very soon went back to Dover.

There was an Old Man of Peru,
Who watched his wife making a stew;
But once by mistake,
In a stove she did bake,
That unfortunate Man of Peru.

There was a Young Lady whose bonnet,
Came untied when the birds sate upon it;
But she said: 'I don't care!
All the birds in the air
Are welcome to sit on my bonnet!'

The Owl And The Pussy-Cat - Edward Lear