The recipe for Witch's Fingers 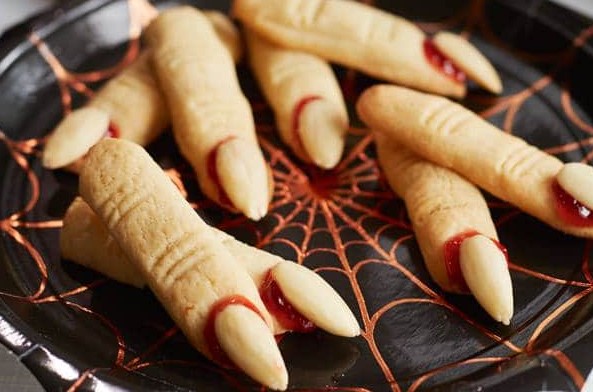 Hooked fingers with bloody nails stick out of the ground. As frightening as they are, these witches' fingers are actually delicious shortbread biscuits, very simple to make with even the youngest children.

Ingredients of the Halloween recipe to make with the kids: Witch's Fingers

Steps of the Halloween recipe to do with the children : Witch's Fingers

In a large bowl (or in a food processor), whisk butter with sugars until creamy. Add the whole egg and yolk, pinch of salt, bitter almond flavouring and whisk again. When the mixture is homogeneous, add the colouring and then incorporate the flour. Work the dough until it forms a ball that comes away from your fingers. Wrap in cling film and store in the refrigerator for at least 1 hour.

Divide the dough into 32 equal pieces. On a floured work surface, roll the dough into sticks about 10 cm long. Shape the dough into the shape of a finger, then using a small round-tipped knife, draw the folds on the joints between the knuckles. Preheat the oven to 180°C.

Place the fingers thus formed on a baking tray covered with baking paper. In a small bowl, lightly beat the egg white. Using a brush, brush the egg white over the fingers. Place an almond on the tip of each finger, pressing lightly to make it stick.

Place the shortbread in the oven for 12-13 minutes and leave to cool.