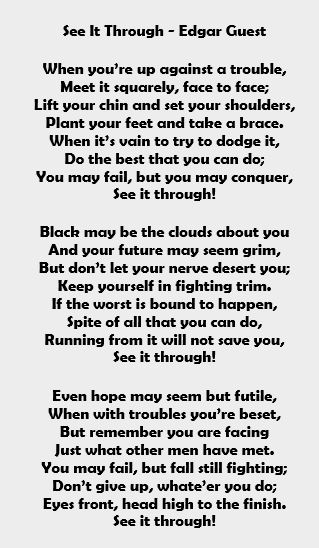 Most every night when they're in bed,
And both their little prayers have said,
They shout for me to come upstairs
And tell them tales of gypsies bold,
And eagles with the claws that hold
A baby's weight, and fairy sprites
That roam the woods on starry nights.

And I must illustrate these tales,
Must imitate the northern gales
That toss the native man's canoe,
And show the way he paddles, too.
If in the story comes a bear,
I have to pause and sniff the air
And show the way he climbs the trees
To steal the honey from the bees.

And then I buzz like angry bees
And sting him on his nose and knees
And howl in pain, till mother cries:
"That pair will never shut their eyes,
While all that noise up there you make;
You're simply keeping them awake."
And then they whisper: "Just one more,"
And once again I'm forced to roar.

New stories every night they ask.
And that is not an easy task;
I have to be so many things,
The frog that croaks, the lark that sings,
The cunning fox, the frightened hen;
But just last night they stumped me, when
They wanted me to twist and squirm
And imitate an angle worm.

At last they tumble off to sleep,
And softly from their room I creep
And brush and comb the shock of hair
I tossed about to be a bear.
Then mother says: "Well, I should say
You're just as much a child as they."
But you can bet I'll not resign
That story telling job of mine.

Being Brave At Night - Edgar Guest

The other night 'bout two o'clock, or maybe it was three,
An elephant with shining tusks came chasing after me.
His trunk was wavin' in the air an' spoutin' jets of steam
An' he was out to eat me up, but still I didn't scream
Or let him see that I was scared - a better thought I had,
I just escaped from where I was and crawled in bed with dad.

One time there was a giant who was horrible to see,
He had three heads and twenty arms, an' he came after me
And red hot fire came from his mouths and every hand was red
And he declared he'd grind my bones and make them into bread.
But I was just too smart for him, I fooled him might bad,
Before his hands could collar me I crawled in bed with dad.

I ain't scared of nothin that comes pesterin' me at night.
Once I was chased by forty ghosts all shimmery an' white.
An' I just raced 'em round the room an' let 'em think maybe
I'd have to stop an' rest awhile, when they could capture me.
Then when they leapt onto my bed, Oh Gee! But they were mad
To find that I had slipped away an' crawled in bed with dad.

No giants, ghosts or elephants have dared to come in there
'Coz if they did he'd beat 'em up and chase 'em to their lair.
They just hang 'round the children's rooms
an' snap an' snarl an' bite
An' laugh if they can make 'em yell
for help with all their might.
But I don't ever yell out loud. I'm not that sort of lad,
I slip from out the covers and I crawl in bed with dad.

The stick-together families are happier by far
Than the brothers and the sisters who take separate highways are.
The gladdest people living are the wholesome folks who make
A circle at the fireside that no power but death can break.
And the finest of conventions ever held beneath the sun
Are the little family gatherings when the busy day is done.

There are rich folk, there are poor folk, who imagine they are wise,
And they're very quick to shatter all the little family ties.
Each goes searching after pleasure in his own selected way,
Each with strangers likes to wander, and with strangers likes to play.
But it's bitterness they harvest, and it's empty joy they find,
For the children that are wisest are the stick-together kind.

There are some who seem to fancy that for gladness they must roam,
That for smiles that are the brightest they must wander far from home.
That the strange friend is the true friend, and they travel far astray
they waste their lives in striving for a joy that's far away,
But the gladdest sort of people, when the busy day is done,
Are the brothers and the sisters who together share their fun.

It's the stick-together family that wins the joys of earth,
That hears the sweetest music and that finds the finest mirth;
It's the old home roof that shelters all the charm that life can give;
There you find the gladdest play-ground, there the happiest spot to live.
And, O weary, wandering brother, if contentment you would win,
Come you back unto the fireside and be comrade with your kin.

Figure it out for yourself, my lad,
You've all that the greatest of men have had,
Two arms, two hands, two legs, two eyes,
And a brain to use if you would be wise.
With this equipment they all began,
So start for the top and say "I can."

Look them over, the wise and great,
They take their food from a common plate
And similar knives and forks they use,
With similar laces they tie their shoes,
The world considers them brave and smart.
But you've all they had when they made their start.

You can triumph and come to skill,
You can be great if only you will,
You're well equipped for what fight you choose,
You have legs and arms and a brain to use,
And the man who has risen, great deeds to do
Began his life with no more than you.

You are the handicap you must face,
You are the one who must choose your place,
You must say where you want to go.
How much you will study the truth to know,
God has equipped you for life, But He
Lets you decide what you want to be.

Courage must come from the soul within,
The man must furnish the will to win,
So figure it out for yourself, my lad,
You were born with all that the great have had,
With your equipment they all began.
Get hold of yourself, and say: "I can."

See It Through - Edgar Guest

When you’re up against a trouble,
Meet it squarely, face to face;
Lift your chin and set your shoulders,
Plant your feet and take a brace.
When it’s vain to try to dodge it,
Do the best that you can do;
You may fail, but you may conquer,
See it through!

Black may be the clouds about you
And your future may seem grim,
But don’t let your nerve desert you;
Keep yourself in fighting trim.
If the worst is bound to happen,
Spite of all that you can do,
Running from it will not save you,
See it through!

Even hope may seem but futile,
When with troubles you’re beset,
But remember you are facing
Just what other men have met.
You may fail, but fall still fighting;
Don’t give up, whate’er you do;
Eyes front, head high to the finish.
See it through!