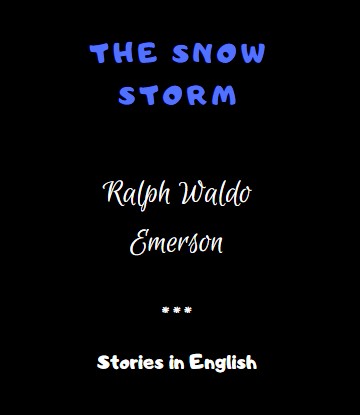 Announced by all the trumpets of the sky,
Arrives the snow, and, driving o'er the fields,
Seems nowhere to alight: the whited air
Hides hills and woods, the river, and the heaven,
And veils the farmhouse at the garden's end.
The sled and traveler stopped, the courier's feet
Delayed, all friends shut out, the housemates sit
Around the radiant fireplace, enclosed
In a tumultuous privacy of storm.

Come see the north wind's masonry.
Out of an unseen quarry evermore
Furnished with tile, the fierce artificer
Curves his white bastions with projected roof
Round every windward stake, or tree, or door.
Speeding, the myriad-handed, his wild work
So fanciful, so savage, nought cares he
For number or proportion. Mockingly,
On coop or kennel he hangs Parian wreaths;
A swan-like form invests the hidden thorn;
Fills up the farmer's lane from wall to wall,
Maugre the farmer's sighs; and, at the gate,
A tapering turret overtops the work.
And when his hours are numbered, and the world
Is all his own, retiring, as he were not,
Leaves, when the sun appears, astonished Art
To mimic in slow structures, stone by stone,
Built in an age, the mad wind's night-work,
The frolic architecture of the snow.